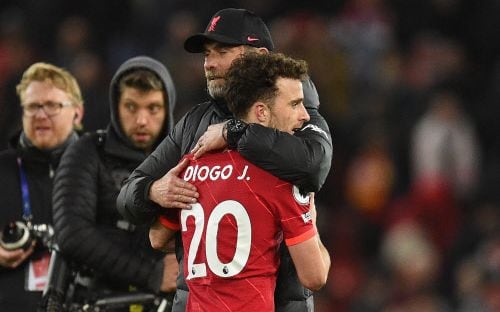 Liverpool: Jurgen Klopp said Liverpool are not breathing down Manchester City's necks yet, but the Reds remain in the hunt for the Premier League title after Diogo Jota's double beat Leicester 2-0 at Anfield.

Victory for Klopp's men cut City's advantage at the top of the table to nine points, but Liverpool still have a game in hand to come on the English champions.

"I don't think they smell our breath already," said Klopp. "But we just try to win football matches."

With Mohamed Salah left on the bench from the start after his exertions at the Africa Cup of Nations and Sadio Mane still celebrating his success with Senegal, Jota took centre stage to continue his excellent season.

The Portuguese produced two predatory finishes as he smashed home a loose ball from close range to open the scoring in the first half before firing into the far corner three minutes from time to take his tally for the campaign to 17 goals.

"He's obviously in a really good goalscoring moment, which is incredibly helpful in the absence of Sadio and Mo," added Klopp. "We have no idea where his limit is."

Leicester boss Brendan Rodgers returned to Anfield under pressure to turn around the Foxes' floundering season after an embarrassing 4-1 defeat to Championship side Nottingham Forest in the FA Cup on Sunday.

Rodgers made a statement with his team selection with a number of first-team regulars left out, including Youri Tielemans, who had captained Leicester at the weekend.

"Tonight was not just about the result, it was about restoring pride," said Rodgers.

"We took a top team right to the very end. I was much happier with that performance tonight and the spirit of the team."

In the absence of Salah and Mane, Klopp handed a first Liverpool start to January signing Luis Diaz.

The Colombian's direct running caught the eye, but the Reds were struggling for the breakthrough until Leicester's weakness from set pieces was exposed for the opener.

Virgil Van Dijk shrugged off the attention of Wilfried Ndidi and after his header was parried by Kasper Schmeichel, Jota was in the right place to smash home.

Klopp introduced Salah to a huge reception on the hour mark and the Egyptian should have made the points safe when he raced clean through on goal only to be denied by Schmeichel spreading himself to block.

Salah then hit the bar with a stunning strike from a narrow angle before Diaz stung the palms of Schmeichel again.

The Dane even got a hand to Jota's powerful effort, but could not keep it out as Liverpool's dominance finally told with a second goal.

Arsenal moved into pole position to claim the fourth place in next season's Champions League as they closed to within a point of fourth-placed West Ham with two games in hand to come thanks to a 1-0 win at Wolves.

The Gunners had fortune on their side in a game dominated by controversial calls.

For the fourth time in six games Arsenal ended with 10 men as Gabriel Martinelli was shown two yellow cards at the same time by Oliver for trying to prevent Wolves taking a throw in then bundling over Chiquinho.

Granit Xhaka's own goal from the resulting free-kick was ruled out for offside against Raul Jimenez and Wolves failed to make the extra man count in the final 20 minutes to deal a blow to their own ambitions of a top-four finish.

"To win football matches like that is extremely difficult and we have to stop it," said Arsenal manager Mikel Arteta.

"We've been talking about it. I have run out of ideas (about how to stop it) I think."

Liverpool prepare again for Atletico amid feud over style, character