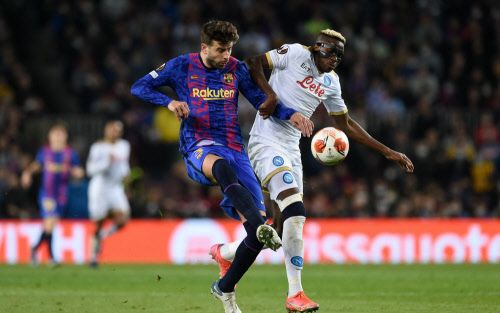 Paris: Rangers stunned Borussia Dortmund 4-2 in the Europa League on Thursday while Barcelona had to come from behind to draw 1-1 at home to Napoli in their play-off first leg tie.

In Dortmund, James Tavernier gave Rangers the lead with a 38th-minute penalty after a handball by Dan-Axel Zagadou from a corner.

Joe Aribo nodded the ball to the far post where Alfredo Morelos was unmarked and scored from close range.

Four minutes after the break, Ryan Kent, who tormented Dortmund all night, found John Lundstram who scored with a powerful strike.

Jude Bellingham replied for the home team with a rasping left-foot shot.

But two minutes after that, Rangers scored again as Zagadou, attempting to deprive Morelos of another tap in, deflected the ball into his own goal.

Pedro Guerreiro cut the deficit with eight minutes left with a ferocious long-range left-footer but Rangers survived without further scares.

"We are not through to the next round, which is what we want. We know we have to have a good performance next week."

Napoli gained a 1-1 draw in Barcelona.

The visitors, challenging for the Serie A title, opened the scoring in the Nou Camp against a home team that is scrambling just to finish in the top four in La Liga.

Polish midfielder Piotr Zielinski ran onto his own rebound to slam the ball home after 29 minutes.

Barcelona increasingly dominated possession but needed one of four penalties awarded for handball by VAR in the Europa League on Thursday to level.

Ferran Torres converted the penalty with confidence for his first goal at Camp Nou for Barcelona but his cool deserted him as he hit two good chances over the bar as Barcelona dominated the closing stages.

"But of course, it's not a friendly, it's the Europa League. The result is insufficient, but I am very happy with the performance."

Real Betis, who won 3-2 at Zenit Saint Petersburg, and Sevilla, who beat visiting Dinamo Zagreb 3-1, both stayed on course for the final in their home city.

Ivan Rakitic gave Sevilla the lead from the spot.

The next three goals came in four minutes just before half time.

Mislav Orsic levelled for the visitors but Sevilla quickly replied through Lucas Ocampos and Anthony Martial, with his first goal since arriving from Manchester United.

Zenit, who have played only friendlies since their last Russian League game on December 12, looked rusty at the start conceding to Guido Rodriguez and Willian Jose in the first 18 minutes.

Artem Dzyuba and Malcolm brought Zenit level with goals three minutes apart, but the home team then presented Betis with the winner in the 41st minute.

Aitor Ruibal ambushed Yaroslav Rakitskyy and found Andres Guardado who curled the ball into the goal.

Real Sociedad grabbed a 2-2 draw away to RB Leipzig.

Mikel Oyarzabal restored the lead with a penalty spot but Emil Forsberg levelled from the spot with eight minutes left.

Atalanta came from behind to edge Olympiacos 2-1 in Bergamo.

In Tiraspol, Braga dominated possession and had more goal attempts, but Sheriff won 2-0.

Luxembourg midfielder Sebastien Thill converted a first-half penalty and with Braga pressing, Sheriff sealed victory on the counter-attack in the 83rd minute with a goal by their Adama Traore.

In the Europa Conference League, Celtic had a less distinguished evening than their Glasgow rivals, losing 3-1 at home to Norway's Bodo/Glimt.