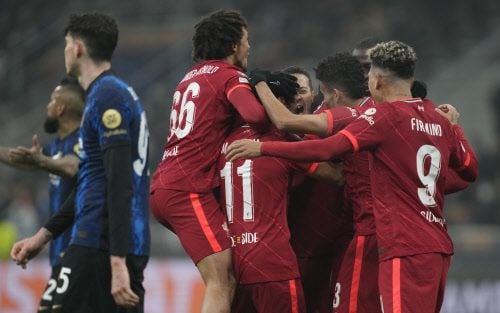 Milan: Liverpool put one foot in the Champions League quarter-finals on Wednesday with a 2-0 win at Inter Milan which came after a hard-fought encounter at a bubbling San Siro.

Goals from Roberto Firmino and Mohamed Salah in the last quarter of an hour gave Liverpool a commanding lead ahead of the last-16 second leg at Anfield in three weeks' time.

The result was harsh on Italian champions Inter, who dominated the contest in front of a passionate home crowd for long periods after the break and struck the woodwork through Hakan Calhanoglu in the 16th minute.

However they could not find their way past a Liverpool backline impeccably marshalled by Virgil van Dijk and were punished late on by a Reds team who have now won their last seven matches in all competitions.

"Tough place to come, a very good team, difficult to break down and I really enjoyed the atmosphere and the crowd. A good result to take back to Anfield," Van Dijk said to BT Sport.

"Everyone expects to be under pressure, it is the Champions League. The message before was you need to be ready to suffer and do the hard work. It is a very good performance, clean sheet and happy days."

The last eight now looks a step too far for Inter after making the last 16 of the Champions League for the first time in a decade, leaving Juventus as Italy's only real hope of success in the competition.

"I think it was a good match and we should be proud of the way we played against one of the best teams in the world. For 65-70 minutes we deserved to win," Inter coach Simone Inzaghi told reporters after the match.

Inzaghi's side started with all the enthusiasm expected of a team back in the knockouts after such a long time away and Lautaro Martinez got the crowd on their feet in the fifth minute with a long-range effort which flew just wide.

Liverpool responded almost immediately and established territorial dominance, with a Salah shot well blocked and Thiago Alcantara shooting over from the edge of the box.

However it was Inter who had the best chance of the half through Calhanoglu, who after being fed by the rampaging Ivan Perisic let off a shot from a tight angle which beat Alisson but smashed out off the crossbar.

They were unlucky again 10 minutes later when, after being sent charging down the right flank, Denzel Dumfries flashed over a low cross which was cut out just as it looked destined to find the feet of an unmarked Edin Dzeko.

Inter came out with the bit between their teeth after the interval and swarmed over a clearly flustered Liverpool but again could not get past Van Dijk and company, who kept getting a foot or head in just as danger seemed imminent.

Perisic hung over a beautiful cross in the 52nd minute which Martinez could not quite get to, and a similar pattern was repeated several times with Liverpool rebuffing an increasingly frustrated Inter team unable to convert its supremacy into goals.

The away side punished them with their first proper chance of the second half, Firmino beating Alessandro Bastoni to Andy Robertson's 75th-minute corner and guiding his header past Samir Handanovic.

Perisic flashed a distance effort just over but then Salah gave Liverpool a huge advantage eight minutes after Firmino's opener with a fortunate strike which squirmed home and gave the Egyptian an incredible eighth goal in seven Champions League games this season.

With the San Siro atmosphere thoroughly deflated, Liverpool then calmly saw out the remainder of the match to almost guarantee themselves a place in next month's draw for the last eight. AFP