Real Madrid bounce back from PSG disappointment by beating Alaves 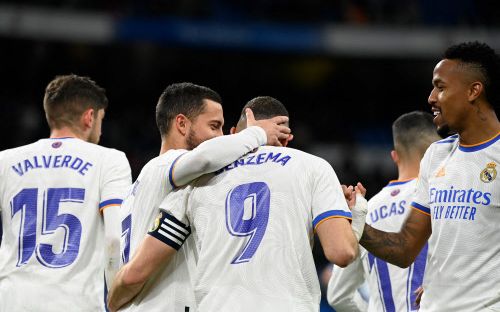 Pamplona: Real Madrid put their defeat by Paris Saint-Germain behind them on Saturday by beating Alaves 3-0 in La Liga as Marco Asensio's stunning goal helped send Carlo Ancelotti's side seven points clear at the top of the table.

But the result flattered Madrid, who struggled to break down Alaves until Asensio unleashed from distance at the Santiago Bernabeu, where the disgruntled fans had whistled with the score goalless at half-time.

"We agreed with the fans," said Carlo Ancelotti. "Nobody in the dressing room was happy with how we played in the first half."

Asensio's goal opened the floodgates as Vinicius Junior finished off Karim Benzema's cut-back before Benzema converted a late penalty after Rodrygo was brought down in the area.

Sevilla can reduce the gap to four points again by winning away at Espanyol on Sunday but Madrid remain the clear favourites to regain the Spanish title, despite their dip in form.

Luis Suarez had earlier lifted the mood at Atletico Madrid after his phenomenal long-range strike helped Atleti to a 3-0 win over Osasuna, ahead of Wednesday's crunch Champions League game against Manchester United.

Real Madrid had managed only one goal in their previous four games -- another Asensio stunner against Granada -- and there was particular criticism after the passive performance against PSG last week brought a 1-0 defeat in Paris.

There was frustration again against Alaves and Ancelotti will hope Vincius' first goal in seven matches and Benzema's first since returning from injury can now reignite the spark.

"We needed this match," Ancelotti said.

They were whistled at half-time after a weary, error-strewn performance that could have left Alaves in front had Jason capitalised on Casemiro gifting the ball away in the penalty area.

Madrid started the second period with renewed intent to play quicker but their efforts were laced with nerves, while around them the fans were increasingly agitated.

Vinicius created the best opening when he nipped round the outside only to see his shot saved by Fernando Pacheco, with Benzema's follow-up hacked off the line by Florian Lejeune.

The were still moments of sloppiness and Asensio was jeered when his backpass was read by Pere Pons, who rounded Thibaut Courtois but failed to steer in from the angle.

The reaction seemingly stayed with Asensio because he celebrated his goal by making a gesture to suggest he wanted more support. It was a brilliant strike, the Spaniard collecting off Benzema on the right, cutting in onto his left foot and arcing a dipping effort into the far corner.

Benzema almost made it two from a Vinicius cut-back, his finish on the turn dribbling up against the post. Moments later the same combination came in reverse, Benzema supplying Vinicius, who this time slotted in.

Rodrygo, on as a substitute, was then tripped by Lejeune, allowing Benzema to make it three from the spot in injury-time.

Atletico did not have to wait so long against Osasuna.

Joao Felix smashed his team into a third-minute lead in Pamplona before driving a superb pass downfield for Suarez to chase after, with the Uruguayan firing in a second before Osasuna goalkeeper Sergio Herrera could scramble back.

Angel Correa tucked in a third late on to round off a convincing win for Atletico, who climb back into the top four and head into the last-16 tie against United with a spring in their step.

The only blot on a satisfying afternoon for Diego Simeone was an injury to central defender Jose Gimenez, who had to be substituted at half-time and could now miss the meeting with the likes of Cristiano Ronaldo and Bruno Fernandes this week.

Barcelona are only three points behind Atletico with two games in hand while Villarreal look increasingly like serious contenders for Champions League qualification after they secured an impressive 4-1 win away at Granada, Arnaut Danjuma scoring a hat-trick.

Unai Emery's side, who host Juventus at La Ceramica on Tuesday, are also three points adrift of Atletico, having played the same number of games as Diego Simeone's side.

Looking forward to the cheers & thrill of fans at the stadiums again: ISL ...