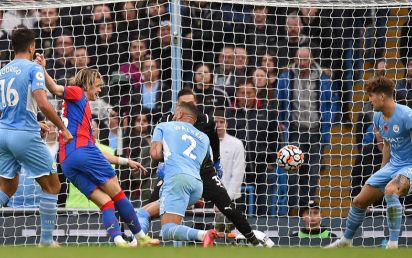 Manchester: Manchester City slumped to a second loss in its Premier League title defense as goals by Wilfried Zaha and Conor Gallagher earned Crystal Palace a 2-0 win at the Etihad Stadium on Saturday.

City’s hopes of recovering from Zaha’s sixth-minute goal were hit when Aymeric Laporte was sent off in first-half stoppage time for bringing down Zaha when he was the last man.

Gabriel Jesus had a 60th-minute goal disallowed for a narrow offside against Phil Foden in the buildup.

Gallagher then added a second goal on the break in the 88th minute, consigning City to its first loss in the league since the opening round against Tottenham.