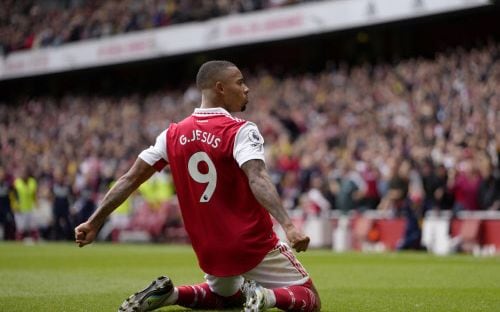 As the Premier League returned with a bang after the international break, Liverpool were rocked by Brighton forward Leandro Trossard's hat-trick in a 3-3 draw at Anfield.

But it was Arsenal who stole the spotlight as Mikel Arteta's side made it seven wins from eight league games, moving them four points clear at the top of the table.

Thomas Partey put the Gunners ahead early in the first half of the north London derby at the Emirates Stadium.

Tottenham defender Emerson Royal was sent off for an ugly foul on Gabriel Martinelli before Granit Xhaka's goal ensured Arsenal would avenge the 3-0 defeat against their hated neighbours last season that cost them a Champions League place.

Ending Tottenham's 13-match unbeaten run in the league was a significant statement of intent from the hosts.

"They were phenomenal. We went from it and we created great energy in the stadium and deserved to win the game," Arteta said.

At Selhurst Park, Chelsea left it late to give Potter his first win in his second match since arriving from Brighton to replace the sacked Thomas Tuchel.

Chelsea, who drew 1-1 with RB Salzburg in the Champions League in Potter's first game, suffered a nightmare start on seven minutes as Wesley Fofana squandered possession and Jordan Ayew fed Odsonne Edouard to fire into the top corner.

Chelsea defender Thiago Silva escaped a red card when he was only booked for stopping Ayew's attack by deliberately handling the ball.

Silva made the most of that escape as he provided the assist for Pierre-Emerick Aubameyang's 38th minute equaliser.

The Brazilian headed the ball towards Aubameyang and he let it bounce across his body before swivelling to fire a half-volley into the bottom corner from just inside the area.

It was Aubameyang's first Chelsea goal since signing from Barcelona on transfer deadline day.

Conor Gallagher, who spent last season on loan at Palace, won it for Chelsea in stoppage-time when the substitute curled a fine finish into the top corner.

"To be a goal down and come away with three points is fantastic, so credit to the players. There's character, that's for sure," Potter said.

With Liverpool in disarray, the Belgian forward struck again in the 18th minute.

But Trossard sealed his treble with a close-range finish from Kaoru Mitoma's cross with seven minutes left.

Spluttering Liverpool are 11 points adrift of first place and Klopp said: "We could have won but would we have deserved it? I'm not sure.

"Confidence is a little flower and when someone stamps on it, it's really difficult."

Newcastle ended their six-match winless run in the league as Eddie Howe's men swept to a 4-1 rout of 10-man Fulham at Craven Cottage.

Everton won 2-1 at Southampton as Conor Coady and Dwight McNeil both scored their first goals for the club after Joe Aribo put the hosts in front.

West Ham climbed out of the relegation zone with a 2-0 win against fellow strugglers Wolves at the London Stadium.

Gianluca Scamacca scored his first Premier League goal in the 29th minute and Jarrod Bowen clinched the points in the 54th minute.