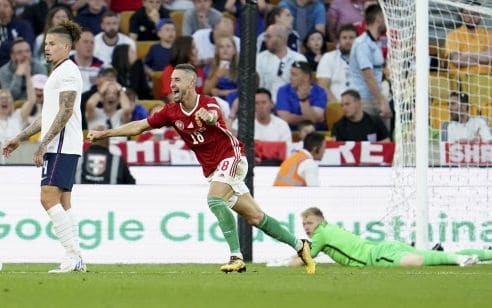 Paris: England suffered their heaviest home defeat in nearly 100 years on Tuesday as Gareth Southgate's side went down 4-0 to Hungary in the UEFA Nations League, while it was also a night to forget for Italy as they lost 5-2 in Germany.

Not since a 5-1 defeat at the hands of Scotland's 'Wembley Wizards' in 1928 had England been beaten by four goals at home, but they were torn apart by Hungary in Wolverhampton and are now in real danger of being relegated from League A to the less glamorous second tier of European international football.

Hungary had already beaten England 1-0 in Budapest 10 days ago and they went in front in the 16th minute at Molineux as Freiburg forward Roland Sallai controlled the ball on his thigh and volleyed in after a free-kick was nodded down.

Sallai scored again 20 minutes from time before England collapsed, with Zsolt Nagy making it 3-0 from an emphatic strike.

Home defender John Stones was sent off and then substitute Daniel Gazdag wrapped up a famous Hungarian triumph with a cool finish over goalkeeper Aaron Ramsdale.

Remarkably, Hungary are the first team to score four goals in an away match against England since the Hungarians themselves, with Ferenc Puskas starring, won 6-3 at Wembley in 1953.

England have just two points from four games and defeat in their next match in Italy in September would condemn them to relegation to League B.

"It was a night to forget but we've got to take it on the chin. We've got to move forward," said England captain Harry Kane.

"We are preparing for a big World Cup and that's the most important thing. We'll learn a lot from this camp."

Hungary are top of League A, Group 3, a point above Germany who leapfrogged Italy thanks to their thumping win over Roberto Mancini's experimental side in Moenchengladbach.

Joshua Kimmich's close-range finish gave Germany an early lead and they doubled their advantage thanks to Ilkay Gundogan's penalty in first-half stoppage time.

Thomas Mueller fired in the third after the restart before Serge Gnabry set up Timo Werner to score two quick-fire goals midway through the second half.

Italy had not conceded five goals in a game since a 6-1 defeat in Yugoslavia in 1957.

The visitors pulled one back when 18-year-old FC Zurich striker Wilfried Gnonto scored 12 minutes from the end to become Italy's youngest ever goal-scorer.

Alessandro Bastoni then further reduced the deficit in injury time but the result still allowed Germany to match their biggest ever win over Italy, recorded in 1939.

"If we play like we did today, many teams will have a hard time against us," said Gundogan.

Meanwhile the Netherlands remain clear at the top of League A, Group 4 after beating Wales 3-2 in a dramatic finish in Rotterdam.

Goals from Noa Lang and Cody Gakpo had the Dutch 2-0 up midway through the first half, but Brennan Johnson rapidly pulled one back.

Gareth Bale then appeared to have salvaged a point for Wales when he converted a stoppage-time penalty, only for Memphis Depay to sweep in a 93rd-minute winner for the Dutch.

The Netherlands are three points ahead of Belgium, who won 1-0 against Poland in Warsaw thanks to Michy Batshuayi's early header.

Wales are bottom of the group with just one point from four games this month, when their focus was on qualifying for the World Cup.

In League B, Ukraine came from behind to draw 1-1 with the Republic of Ireland in the Polish city of Lodz, with Artem Dovbyk equalising after Nathan Collins had opened the scoring in style.

Ukraine are top of Group 1, a point ahead of Scotland who won 4-1 in Armenia with Stuart Armstrong scoring a brace before John McGinn and Che Adams added further goals and the hosts finished with nine men.

Edin Dzeko netted twice for Bosnia and Herzegovina in their 3-2 defeat of Finland in Group 3. AFP