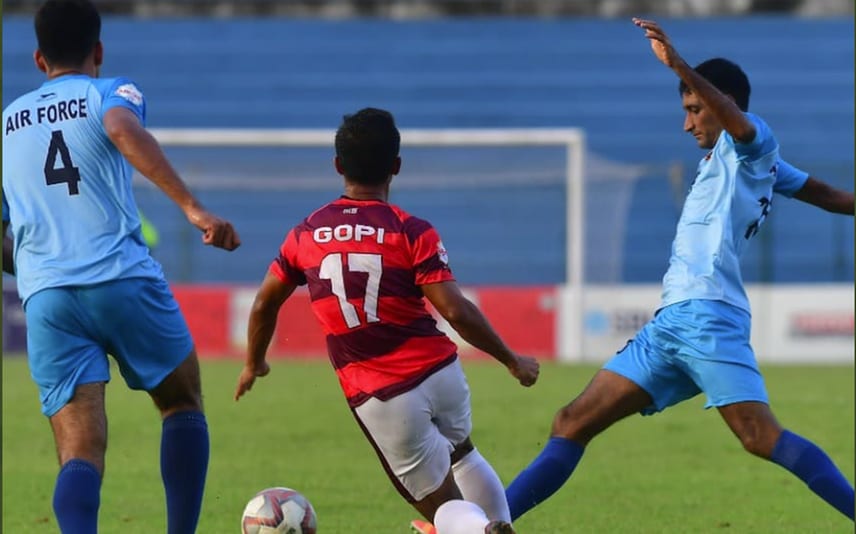 Kalyani: FC Bengaluru United (FCBU) became the first team to make it to the knockout stages of the 130th Durand Cup, when they beat Indian Air Force 4-2 in a thrilling Group A encounter, at the Kalyani Stadium on Thursday.

Spaniard Pedro Manzi was the architect of victory, scoring two, his second and third of the tournament, and creating two for Yumnam Gopi Singh to score, as the spirited Airmen, who dominated for large parts of the second half, crashed out with a game to go.

FCBU had beaten CRPF 1-0 in the first Group A game and now have six points from two games, which looks more than enough to make it to the next round.

The Indian Air Force had gone down 1-4 to Mohammedan Sporting, but Thursday's display was a much-improved one from them.

The Airmen had an early chance to go ahead in the very first minute of the game when Vivek found himself behind the FCBU defense and in the clear but he could not capitalise on the chance.

Manzi scored his first from the spot in the 21st minute when Air Force defender Davinder was ruled to have handled the ball inside the box.

FCBU then doubled their advantage seven minutes later as Manzi now turned provider, finding Yumnam Gopi Singh with a fine ball to catch the Air Force defense napping. Gopi took one touch to go away from an onrushing Subhajit Basu in goal to calmly slot it past him.

Three minutes before the lemon break, however, Vivek got one back for the Airmen as he latched on to a cross from the hardworking Prabhjot, took a touch in the six-yard box to go past Kunzang Bhutia in the FCBU goal, and slot home calmly, the organisers said in a release on Thursday.

That goal must have inspired the Airmen to no end as they were a transformed team in the second-half dominating proceedings for a good half an hour. Vivek got his second of the game from a corner by Shahbaaz as he leapt above the FCBU defense to equalise.

Vivek then missed his hattrick several times including one just a minute after his second goal, Prabhjot and Saurav Sadhukan also missed a flurry of chances.

FCBU finally broke the deadlock in the 72nd minute as the same Manzi-Gopi combination struck again. Manzi then got his second of the game in injury time to ensure FCBU had no late jitters.

In Thursday's first Group D game played at the Vivekananda Yuba Bharati Krirangan (VYBK), the Army Red Football Team defeated the Assam Rifles Football Team 4-1. This was also the first all regimental affair in this edition of the Durand Cup. The two military teams have been drawn in Group D alongside Gokulam Kerala FC and Hyderabad FC.