Durand Cup: Quarter-final game between Army Red and FC Bengaluru United called off due to COVID-19 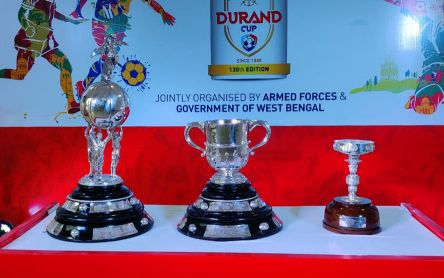 Kolkata: The Local Organising Committee (LOC) of 130th Durand Cup has called off the quarter-final game between Army Red and FC Bengaluru United (FCBU) scheduled for Friday at the Kalyani Stadium due to positive Covid-19 cases reported in the Army Red squad.

The Army Red squad decided to withdraw from the tournament as a result and FCBU received a bye into the semi-finals.

"All decisions have been taken, keeping in mind the health and safety of players and officials primarily and the continuity and success of the tournament," an official release read.

General Repswal (Chief of Staff, HQ Eastern Command, SM, VSM) had on September 2 confirmed Kolkata as the home of the Durand Cup until 2025.

"The 129th edition of the Durand Cup was held in Kolkata in 2019. The kind of response the tournament got in Kolkata was immense, with a tremendous amount of support from the state government. I must mention it because of every department of the state govt. went out of their way to ensure the tournament becomes a success. You will all be very happy to know that for the next five years, Durand Cup will be conducted in Kolkata," he said.

In the previous 129th edition, held for the first time in the city, Gokulam Kerala emerged champions, beating Mohun Bagan 2-1 in front of a packed stadium, to register their first silverware in club history.