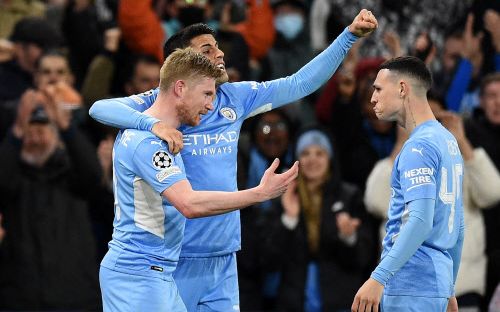 Guardiola's side spent much of the night banging their heads against the red and white wall of Atletico's massed defence at the Etihad Stadium.

But Guardiola sent on Phil Foden midway through the second half and his sublime pass teed up De Bruyne to finally reward City for their territorial dominance.

"I didn't expect to win three or four nil. I knew who we were facing. They have been together for many years," Guardiola said.

"They defend so well, so compact and so deep. We were patient. You have to be against these teams. They want you to be anxious.

"It's a good result. Unfortunately we had a couple more chances with Kevin to score again."

While Guardiola launched a water bottle in a frenzied celebration that underlined what a testing night it had been for his team, the City boss knows the tie is far from over.

"Even a 1-0 lead going to Madrid is tough," Guardiola said.

"We have to control our emotions. It will be a good test for us, our maturity. We will try to score and win the game."

At the start of a season-defining 11 days for treble-chasing City, this was a qualified success that justified their patient performance.

But Atletico have already knocked out Manchester United in the last 16 this season, while Liverpool fell victim to Diego Simeone's side when the Reds were the holders in 2019-20.

The Spanish champions will believe they can cause another surprise in the second leg in Madrid on April 13.

"It's clear we were playing against an extraordinary opponent. We have to use a great way of defending and without being embarrassed," Simeone said.

"We need to be better, see if we can have the ball a bit more in the second leg. Perhaps we can create more difficulties. We are still in the tie."

City have no margin for error over the next two weeks as the Premier League leaders host Liverpool, just a point behind them in the title race, on Sunday.

They head to Madrid next week before facing Liverpool again in the FA Cup semi-finals at Wembley three days later.

Guardiola has often been criticised for his curious team selections in previous Champions League knockout stage defeats with City.

However, Guardiola's game-changing decision to introduce Foden should silence a few critics after it turned a difficult evening into a vital victory.

"When the game was a little bit flat, we knew we could change it with the substitutes," Guardiola said.

"Phil has a special quality.He had the composure to make an incredible assist and Kevin is in the best moment of his season."

As ever, City monopolised possession, yet they often found themselves shuffling passes across midfield before Atletico shut the door on them.

Gradually, City rose to the challenge and Ilkay Gundogan went close with a curling shot that deflected wide off Stefan Savic soon after the interval.

When Aymeric Laporte headed wastefully over from Riyad Mahrez's corner, Guardiola had seen enough and he sent on Foden, Jack Grealish and Gabriel Jesus.

Foden's arrival was an inspired move as the England forward played a key role when City at last broke through in the 70th minute.

Taking possession outside the Atletico area, Foden shimmied away from two defenders and slipped a precise pass to De Bruyne, who timed his run perfectly to drill a low strike into the far corner from a tight angle. AFP