This wasn't just a game. It was the making of history, marking the rise of a new dawn after sportspersons were forced to stay indoors in the last few months thanks to the coronavirus pandemic. 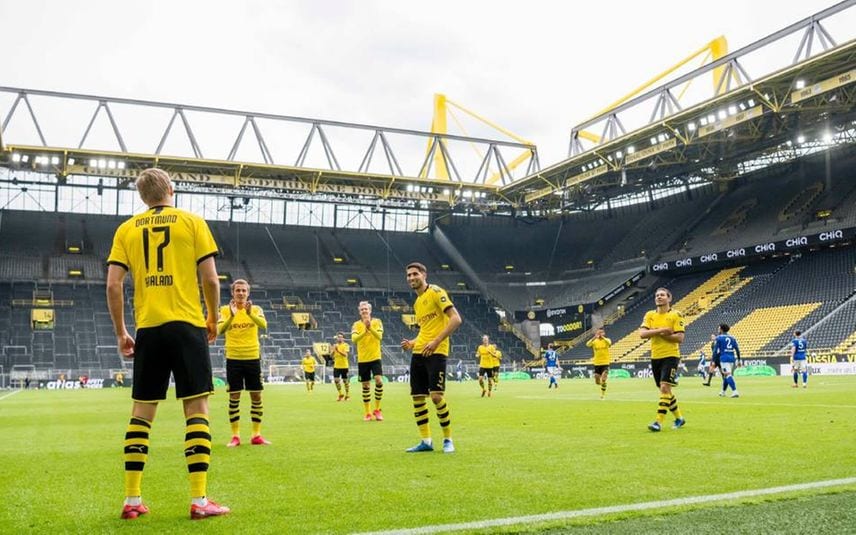 Dortmund: As hotshot young Borussia Dortmund striker Erling Braut Haaland caressed the ball into the back of net in 29th minute against crosstown rivals Schalke at Signal Iduna Park on Saturday, football well and truly returned to the pitch after being abruptly halted in March due to coronavirus pandemic.

This wasn't just a game. It was the making of history, marking the rise of a new dawn after sportspersons were forced to stay indoors in the last few months thanks to the coronavirus pandemic. The game might have seen the return of footballers on the pitch, but it had a greater significance off it as life seems to slowly crawl back to normalcy after the pandemic brought it to a standstill.

Bundesliga became the first league in Europe to open its doors for footballers even if fans had to be content with following the action on television or OTT platforms.

Five matches were played on Saturday with Dortmund headlining the Super Saturday against Schalke, recording a comprehensive 4-0 victory at home. Haaland, Raphael Guerrero (brace) and Thorgan Hazard got on the scoresheet as the Yellow Brigade got over the line in stunning style in the absence of the famous 'Yellow Wall' behind their back.

The silence inside the stadium was deafening as crowd chants was replaced by voice of managers shouting instructions to their respective players. Every now and then, referee's whistle broke the monotony of ball crashing against the boots of players. But then, even this would have seemed a dream a few weeks back when life was at risk even if you stepped out of your house.

As Haaland scored his 10th goal of the season for Dortmund since sealing a move in January, social distancing norms stopped teammates from jumping on the scorer but couldn't stop the Norwegian from breaking into the most unlikeliest of dances near the corner flag.

In other matches, Leipzig drew 1-1 against Freiburg, Berlin dispatching Hoffenheim 3-0 away from home, Wolfsburg winning 2-1 in Augsburg and Paderborn holding Dusseldorf to a 0-0 draw at home.

Bundesliga is up and running now and it seems to have provided the perfect blueprint to Premier League, Serie A and LaLiga who are also looking to resume their respective leagues in the coming month.