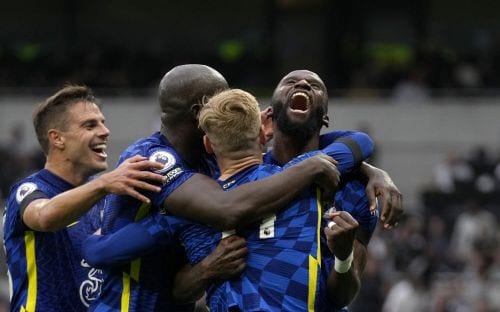 London: Chelsea extended their flying start to the season with a 3-0 win at London rivals Tottenham as both clubs paid an emotional tribute to their former striker Jimmy Greaves on Sunday.

Thiago Silva put Chelsea ahead early in the second half before N'Golo Kante bagged his first club goal since December 2019.

Tuchel's unbeaten side sit top of the Premier League after winning four of their first five games.

Chelsea have only conceded one league goal so far this season despite a tricky fixture list that featured trips to Liverpool, Tottenham and Arsenal.

They face another test of their title credentials next weekend when champions Manchester City visit Stamford Bridge.

"I was absolutely not happy with the first 45 minutes. We lacked intent and energy," Tuchel said.

"A game like this in the Premier League, a derby at Tottenham, it is not only about skilful play. It is also about aggression and winning duels.

Tottenham manager Nuno Espirito Santo admitted his team could have no complaints after being outclassed.

"There were a lot of things that went wrong. In the second half, the set-piece and goal changes the game. Chelsea took control and were the better team," Nuno said.

"It's difficult. We know we have a lot of things to improve." It was fitting that two of Greaves' old clubs met on the day he passed away aged 81.

Hailed as "the finest marksman this country has ever seen" by Tottenham, Greaves is the club's record scorer with 266 goals in 379 appearances between 1961 and 1970.

The charismatic Londoner started his career with a prolific spell at Chelsea and netted 44 times in 57 appearances for England, featuring in their 1966 World Cup-winning squad.

An image of Greaves wearing Tottenham's famous white shirt was displayed on screens inside and outside the club's north London stadium before kick-off.

In a moving tribute, several former Tottenham greats, including Greaves' old team-mate Martin Chivers, lined up on the touchline to join both teams and the 62,000 crowd in a minute's applause.

Tottenham striker Harry Kane had urged Tottenham to "put in a great performance" in Greaves' honour.

But the England captain was unable to land his first league goal this season as Chelsea showed the kind of ruthless instincts Greaves would have approved of.
In a tight first half, Chelsea's Andreas Christensen shot just over before Kai Havertz poked narrowly wide.

Tottenham's frenetic tempo meant Kepa Arrizabalaga had to stay alert and he rushed off his line to save bravely at Son Heung-min's feet after the South Korean sprinted onto Giovani Lo Celso's pass.

In a game-changing move, Tuchel sent on France midfielder Kante for Mason Mount at half-time, neutralising Tottenham's high press in the process.

"It was perhaps a bit more defensive, but I wanted to give the sign I was not happy with the energy," Tuchel said.

Where Chelsea had found it hard to take control before Kante's introduction, now they were in the groove and Silva struck in the 49th minute.

Alonso's corner found the Brazilian eight yards out and he rose above Dele Alli to thump a superb header past Hugo Lloris.

But Chelsea were rampant and they struck again in the 57th minute when Kante's 25-yard drive took a wicked deflection off Dier and trickled past the wrong-footed Lloris.

Tottenham lost heart as their second successive league defeat loomed and Rudiger rubbed salt into the wounds with a fine finish from Timo Werner's cross in the final moments.