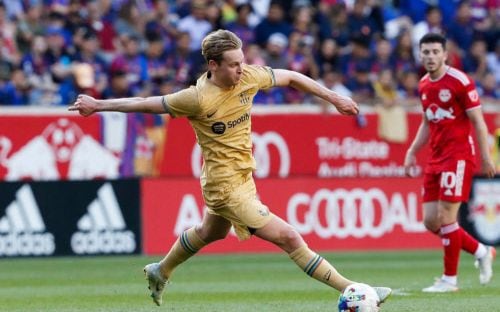 Frenkie De Jong is now the talk of the town for Manchester United and Chelsea. United, who leads the race for Netherland International, is looking to seal the deal before the end of the transfer window. New manager Erik Ten Hag had already viewed De Jong as a "crucial" piece in his Manchester United re-build.

The club is ready to match the salary expectations of the player but is not ready to spend €80 million to get the deal done. Meanwhile, Chelsea is reported to have held talks with Barcelona over a potential deal for De Jong. Thomas Tuchel sees Barcelona star as an ideal replacement for injury-prone Kante. Meanwhile, the club is also likely to push West Ham with an offer for Declan Rice.

Meanwhile, De Jong is said to have turned down the earlier offers from Red Devils due to a lack of Champions League football. However, the massive wage bills of De Jong will likely force Barcelona to sell him.