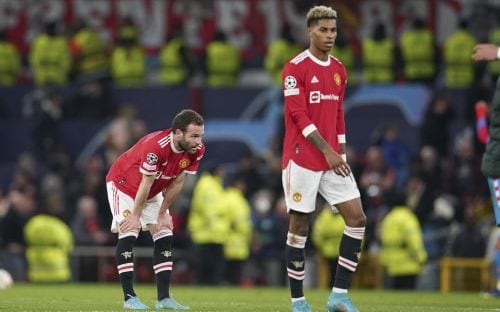 The last path to a title was ended at an Old Trafford now accustomed to letdowns as United was knocked out of the Champions League in a 1-0 loss to Atlético Madrid on Tuesday.

In a tight and tense game, Renan Lodi made the difference by scoring his first goal in the competition in his 25th appearance, meeting Antoine Griezmann’s cross with a header after being left unmarked at the far post by defender Diogo Dalot in the 41st minute.

“I wasn’t playing a few months ago, but everything has changed now and I’m very happy with that," the 23-year-old left wing-back Lodi said. “It’s a tough role. I’m working at it, learning.”

So often the team's savior, David de Gea was beaten. The goalkeeper feels the pain more, being the only starter still in the team from the end of the trophy-filled Alex Ferguson era in 2013.

“Of course it’s not good enough," De Gea said. "It’s hard for the club, for us and the fans. This is where we are at the moment. It is a difficult situation, but we have to keep fighting.”

Cristiano Ronaldo departed Old Trafford before Ferguson retired and the malaise kicked in. The 37-year-old star returned this season — after collecting trophies at Real Madrid and Juventus — to be the difference-maker.

Rather than dazzling, as he did with Saturday's hat trick against Tottenham, Ronaldo didn't manage a single shot against the Spanish champions.

Instead, United was left relying on defender Raphaël Varane attempting to equalize in the second half, and his header was kept out by Jan Oblak. United could find no way past the goalkeeper three weeks after a 1-1 draw in Madrid that counted for nothing with away-goals no longer carrying an advantage.

“For me, Oblak is the best goalkeeper in the world,” Atlético captain Koke said. "He’s shown it once again tonight.”

Atlético showed the blueprint to grab a win away, by scoring from one of only three shots on target.

“We suffered when we had to,” said Rodrigo De Paul, whose long-range shot was blocked by De Gea in the first half, "and hit when we had the chance here at a great stadium, against a great team.”

Diego Simeone, a two-time Champions League runner-up, leads Atlético back into the quarterfinals like in 2020. Europe is the platform for Atlético to raise its game this season, with the team clinging onto fourth place domestically after winning the title last season.

“We wanted to show tonight that we’re a really tough side to play against,” Griezmann said. “We wanted to be at this level more consistently and go forward.”

United goes backward, with only two appearances in the Champions League quarterfinals in a decade, in 2014 and 2019.

Not since the 1970s has United gone as long without a trophy with the second-tier Europa League in 2017 the last honor for, historically at least, English football’s most successful club.

There’s not much to show for more than $1 billion in transfer spending since the two-time Champions League winner Ferguson retired as manager nine years ago.

Such is the instability at United that it’s an interim coach in Ralf Rangnick who has presided over United’s exits from the FA Cup and Champions League early in 2022.

“The second half was difficult," said the German, who took Schalke to the Champions League semifinals in 2011. "I don’t think the game went for more than three minutes, it was always interrupted, there was always somebody lying on the floor.

“There were also some curious refereeing decisions. I wouldn’t say they were decisive, but at least he fell too often for those time-wasting antics and, in the end, four minutes extra time was a joke for me.”

Now the priority is just regaining the fourth spot in the Premier League to return to the Champions League next season for whoever is in charge of United.

A potential full-time successor to Ole Gunnar Solskjær, who United fired in December, is Erik ten Hag whose Ajax team was also eliminated in Tuesday’s other last-16 second leg. Darwin Núñez’s goal gave Benfica a 1-0 win in Amsterdam to advance 3-2 on aggregate. AP