Liverpool are one step closer to a third UEFA Champions League final in five seasons after a 2-0 win against Villarreal in the first-leg of their semifinal tie at Anfield, here on Wednesday. 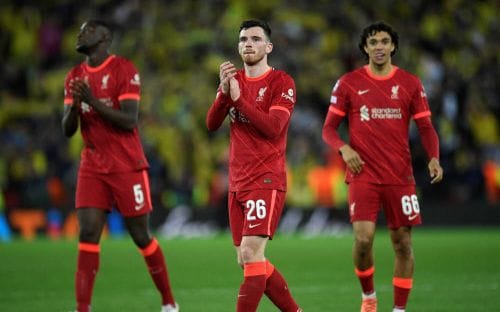 London: Liverpool are one step closer to a third UEFA Champions League final in five seasons after a 2-0 win against Villarreal in the first-leg of their semifinal tie at Anfield, here on Wednesday.

Liverpool scored twice in three second-half minutes to assume control of their UEFA Champions League semifinal against Villarreal. An own goal from Pervis Estupinan and Sadio Mane's 20th of the season in a three-minute second-half spell did the damage and the only criticism which could be levelled at Jurgen Klopp's side was that they should have scored more.

First, Sadio Mane headed wide 12 minutes into a characteristically dominant display. Jordan Henderson hit a post with a cross-shot and Mohamed Salah twice missed the target before a thunderous Thiago Alcantara effort came back off the crossbar.

If not dominant enough in the opening period, the six-time winners went up a gear after the interval. Fabinho's header was ruled out for an offside in the build-up, but three minutes later the hosts were in front when Henderson's cross ballooned into the net via a deflection off Pervis Estupinan and a Geronimo Rulli's fist.

Liverpool threatened to cut loose when Mane latched on to Salah's pass before poking past Rulli, but Villarreal managed to limit the damage.

Mane, whose combination with Mohamed Salah looked back to its best, had three efforts, Salah himself had a couple while Luis Diaz cut in from the left to blast a right-footed effort at Geronimo Rulli who unconvincingly claimed at the second attempt.

Villarreal achieved what they set out to achieve in the first half - defend in numbers, slow the pace down and frustrate Jurgen Klopp's players. It worked a treat until the visitors were hit by a quickfire double in the opening stages of the second half, putting Liverpool firmly in the driving seat ahead of the second leg in Spain. It will take an astonishing comeback from the Yellow Submarine to deny the Reds.

Under Unai Emery the visitors had lost just one of 12 away games in Europe, in stoppage time at Old Trafford last September, and had beaten Juventus and Bayern Munich to reach their first Champions League semifinal since 2006.
IANS