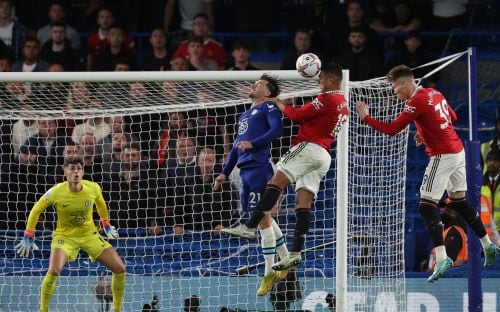 London: Erik ten Hag hailed Manchester United's "spirit" as Casemiro grabbed his first goal for the club in stoppage-time to salvage a dramatic 1-1 draw at Chelsea on Saturday.

Ten Hag's side were seconds away from defeat after Jorginho's 87th minute penalty put Chelsea ahead in United's first match since Cristiano Ronaldo was sent into exile.

But former Real Madrid midfielder Casemiro ensured United left west London on a six-match unbeaten run as he netted with a header that was awarded by goal-line technology after crossing the line by millimetres.

"I have to make a big compliment to my team. To fight back with a fourth game in 10 days, you see the spirit and how they deal with setbacks. Really good," Ten Hag said.

"We dictated the game and I am happy with that. If you concede a goal late it is difficult. It is a fair result."

Ronaldo was missing from the United squad after being dropped by Ten Hag after his refusal to come on as a substitute in Wednesday's win over Tottenham.

It would be no surprise if United and Ronaldo parted ways in the January transfer window, but Ten Hag's men did not appear troubled by the striker's latest petulant outburst.

With Ronaldo banished, United were still the stronger side for long periods, while there were no chants in support of the 37-year-old from the visiting fans packed into one corner of Stamford Bridge.

Fifth-placed United remain one point behind fourth placed Chelsea, who are unbeaten in eight matches in all competitions since Graham Potter replaced the sacked Thomas Tuchel.

It's disappointing because we're 1-0 ahead at the end but over the course of the game a point is about right and I'm not sure if we did enough to win it," Potter said.

"A really fighting performance from us, we improved a lot after 30 minutes so we will take what we get."

The only concern for United was the sight of France centre-back Raphael Varane limping off in tears in the second half after a World Cup injury scare.

Varane's leg twisted awkwardly as he stretched in a failed attempt to intercept a pass towards Pierre-Emerick Aubameyang, leaving him crumpled in a heap on the pitch for several minutes.

The 29-year-old was eventually able to walk around the pitch unaided, but his angst at potentially missing the World Cup, which starts on November 20, was clear as he punched the corner flag in frustration.

"We have to wait 24 hours and then we will know what it is," Ten Hag said.

Lost in the fuss over Ronaldo's antics was the vibrancy of United's performance against Tottenham and they retained that quality at the Bridge.

Luke Shaw fizzed a low drive just wide from the edge of the area, then Anthony's curler forced a good save from Kepa Arrizabalaga.

Fernandes's pin-point pass opened up the Chelsea defence again, leaving Marcus Rashford one on one with Kepa but a poor first touch saw his shot thud into the keeper's chest.

Rashford didn't let that mess drain his confidence and he surged into the Chelsea area for a fierce strike that Kepa palmed away.

With Chelsea being over-run in central areas, Potter responded by replacing centre-back Marc Cucurella and sending on midfielder Mateo Kovacic in a bid to disrupt United's rhythm.

Anthony missed a glorious chance, the winger firing wide after Fernandes sent him racing clear on goal, while Chelsea's Trevoh Chalobah hit the bar with a second half header.

Potter's men looked to have won it in when Scott McTominay needlessly fouled Armando Broja and Jorginho calmly slotted past David De Gea.

But four minutes into stoppage-time, Casemiro met Shaw's cross with a superb header that Kepa could only tip onto the post, the ball bouncing down just over the line to spark wild United celebrations.