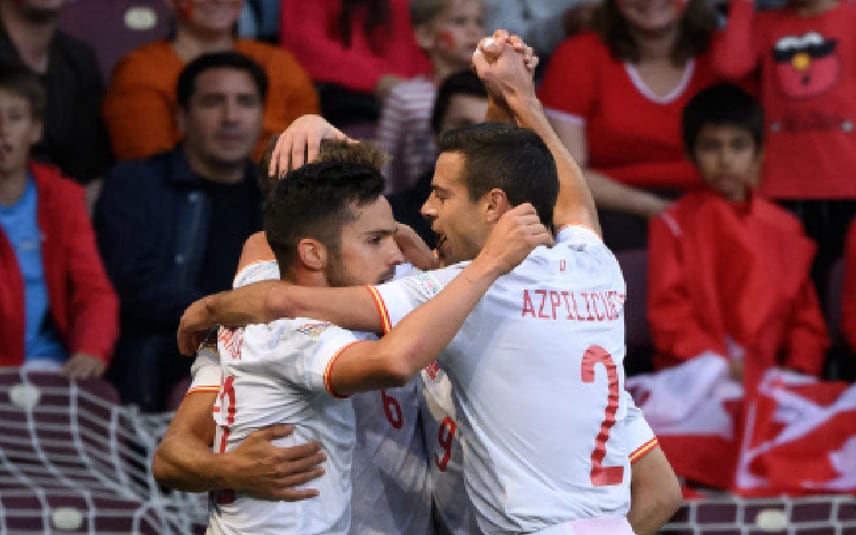 Lisbon: Joao Cancelo and Goncalo Guedes scored a goal each to help Portugal to a 2-0 win over the Czech Republic in their UEFA Nations League League A Group 2 tie at Jose Alvalade Stadium, Lisbon on Thursday.

Joao Cancelo scored for his side in the 33rd minute. Guedes followed soon with another goal in the 38th minute to give Portugal a 2-0 lead heading into the half-time, which the side was able to maintain till the end of the match.

With this win, Portugal is at the top of their group's table in League A with seven points. Spain is just two points behind the current toppers with five points, moving to the second spot after a 1-0 win over Switzerland after Pablo Sarabia struck in the 13th minute of the game.

Earlier on Wednesday, Belgium responded to their opening UEFA Nations League defeat against the Netherlands with five second-half goals as they came back to beat Poland 6-1 on Wednesday.

Belgium began brightly, Michy Batshuayi hitting the post then having a goal disallowed in the first five minutes.

Poland's response was a patient one, their strikers going closer and closer until Robert Lewandowski took one touch to control then got their opener with a half-volley after 28 minutes. The home team were level shortly before half-time as Timothy Castagne's smart stabbed pass was steered in by Axel Witsel to make it 1-1 at the break.

From there, Belgium went on to dominate and took a merited lead when Eden Hazard broke to set up Kevin De Bruyne as he curled in from just inside the box.

Substitute Leandro Trossard then scored twice - his second a deep curling effort - before a long-range drive from Leander Dendoncker and Lois Openda's first goal for his country rounded off an ultimately emphatic win.

Also, The Netherlands made it two wins from two in UEFA Nations League Group A4 in dramatic fashion, Wout Weghorst heading the winning goal four minutes into added time, moments after Rhys Norrington-Davies had seemingly salvaged a point for Wales on Wednesday.

The first half proved an even contest, Norrington-Davies heading narrowly over for the home side and Harry Wilson drawing a diving stop from Mark Flekken.

At the other end, Teun Koopmeiners had an early effort blocked while Cody Gakpo's shot deflected just wide shortly before half-time.

The Netherlands emerged for the second half with renewed purpose and within five minutes they were ahead. Patient build-up created space for Jery Schouten to find Koopmeiners just inside the area, and a low shot flew past the dive of Wales' substitute goalkeeper Adam Davies.

Wales sought a way back into the contest but looked like coming up short until two minutes into added time when Connor Roberts delivered an inviting cross that Norrington-Davies climbed above Hans Hateboer to meet at the far post with a thumping header.

Before Welsh celebrations had died down, however, Netherlands substitute Frenkie de Jong led a counterattack and found Tyrell Malacia down the left. Weghorst pulled away to the penalty spot. ANI