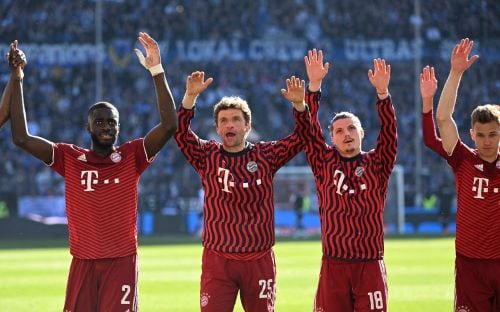 The Bundesliga race could be decided when the teams meet in Munich next Saturday.

It was an expected but welcome win for Bayern after a surprise elimination by Spanish side Villarreal in the Champions League quarterfinals.

“In the end, the first 20 minutes were a good indicator of how we come out of this week," Bayern coach Julian Nagelsmann said. “It was a deserved win and important that we got the chance to seal the title against Dortmund.”

The goal was awarded following a video replay which confirmed Lewandowski was not offside when he went to meet Joshua Kimmich's pass.

Serge Gnabry scored the second goal — also awarded following a VAR review — in the eighth minute of first-half stoppage time from another pass by Kimmich.

The first half was delayed near the end when Arminia’s Fabian Kunze was stretchered off injured after taking an elbow during an aerial challenge.

Bayern was rarely troubled by a side which has scored only 23 goals, nine less than Lewandowski has managed himself. Lewandowski, who has netted nearly 350 goals for the club overall, is in talks over a new contract, with his current deal expiring at the end of next season.

He set up Jamal Musiala for the third goal in the 85th.

Arminia said that about 10 minutes from the end of the match a fan had to be “resuscitated” in the stands and was taken to the hospital after being stabilized.

,Meantime, Leipzig leapfrogged Bayer Leverkusen for third place with a 1-0 win in Leverkusen.

Dominik Szoboszlai scored the winner in the 69th to give Leipzig its third straight win in all competitions. The club is unbeaten in nine consecutive league games.

Leverkusen was coming off two wins and a draw in its last three games.

Sixth-place Union Berlin built on its derby win over Hertha Berlin with a 2-0 victory against Eintracht Frankfurt.

Eintracht, coming off a win over Barcelona in the quarterfinals of the Europa League, was one of only two Bundesliga teams that Union had failed to beat at home since it earned promotion in 2019. Bayern is the other.

Last-place Greuther Fürth drew 0-0 at eighth-place Hoffenheim. Fürth is 12 points from safety and only has a mathematical chance of avoiding relegation.