This is Bayern's second consecutive German Cup title, having beaten Leipzig in the final last season and 20th in total. 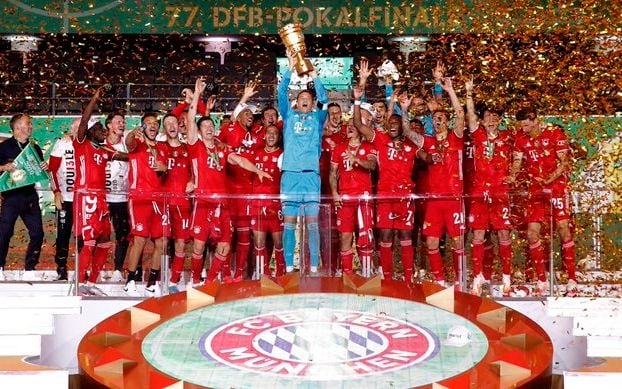 Berlin: German champions Bayern Munich extended their domestic domination by winning their 20th German Cup title with a 4-2 win over Bayer Leverkusen in the final. Robert Lewandowski scored twice while Serge Gnabry and David Alaba were both on the scoresheet.

Leverkusen were given some hope when Sven Bender scored in the 63rd minute to make the score 3-1. However Leverkusen could not make any significant inroads post that and Lewandowski scored his second in the 89th minute to put the result beyond doubt. Leverkusen midfielder Kai Havertz then converted a 95th minute penalty to take his team's tally for the night to two goals.

Alaba gave Bayern the lead with a freekick in the 16th minute after Lewandowski was fouled at the edge of the box. The Bavarians then doubled their lead when Joshua Kimmich released Serge Gnabry down the right channel and the winger's uncontested shot nestled into the bottom corner for the 24-year-old's 20th goal of the season in all competitions.

Leverkusen's goalkeeper Lukas Hradecky was more to blame for the third when he fumbled a thunderous shot from Lewandowski from range that was straight at him. The ball bounced off his hand and crept over the line and Lewandowski celebrated his 50th goal of the season. Lewandowski then chipped the ball over Hradecky in the 89th to score his second.

Havertz's penalty came after late drama involving VAR which spotted a handball inside the box. This is Bayern's second consecutive German Cup title, having beaten Leipzig in the final last season.