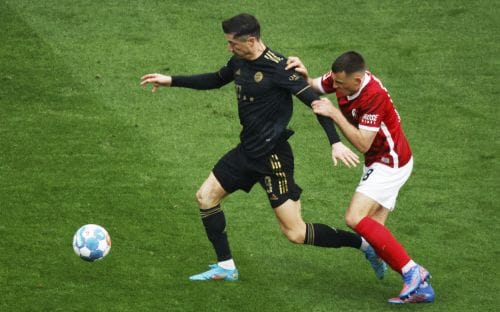 The German record champions dominated possession from the kick-off while Freiburg focused on their defence.

Bayern were able to combine their way through the midfield but once the visitors reached the final third, they couldn't threaten Freiburg's goalkeeper Mark Flekken, Xinhua reports.

Flekken remained in the thick of things though as the goalie underestimated a Joshua Kimmich free kick into the box, allowing injury returnee Leon Goretzka to break the deadlock in the 58th minute.

Bayern's lead didn't last long as Freiburg's striker Nils Petersen restored parity with a left footed hammer in the 63rd minute, 17 seconds after his substitution. It was Petersen's 100th goal in Freiburg.

Freiburg's resistance was broken as Bayern made it 3-1 in the 82nd minute when Dayot Upamecano's long ball found Kingsley Coman, who drilled the ball past Flekken from 18 meters.

Bayern didn't complete its scoring and made it four after substitute Marcel Sabitzer capitalized on Gnabry's cutback pass in the injury time.

"I am satisfied even if the result is not good. We played well in the first half. In the second half everything was fine until Bayern showed its individual quality," said Freiburg coach Christian Streich.

"We played better in the second half as we took the lead with a set piece. We absorbed the equalizer very well and scored some nice goals," said Nagelsmann.

Newly promoted Bochum shocked Hoffenheim 2-1 after Takuma Asano provided one goal in each half.

Eintracht Frankfurt played out a stalemate with last placed Greuther Furth, while wasteful Stuttgart was held to a 1-1 draw by Arminia Bielefeld.
IANS