Battle for the title: Everything to play for in vital Premier League weekend

Another huge weekend of matches in the Premier League is just around the corner as the battle for the title, the top-four and to avoid relegation go down to the wire. 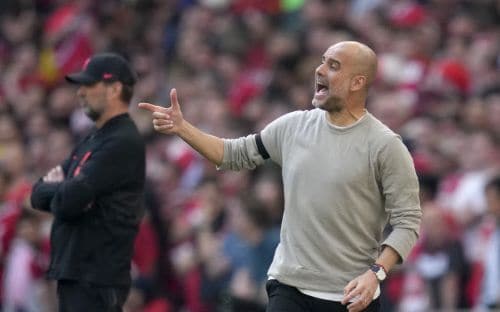 London, April 23 (IANS) Another huge weekend of matches in the Premier League is just around the corner as the battle for the title, the top-four and to avoid relegation go down to the wire.

League leaders Manchester City kept their nerves in midweek to remain top of the table after Liverpool had overtaken them for 24 hours, and Pep Guardiola's side should expect to beat second from bottom Watford in the Ethiad Stadium on Saturday afternoon.

The big question mark for Guardiola is how much he will rotate his squad ahead of Tuesday's Champions League semifinal first leg at home against Real Madrid on Tuesday, Xinhua reports. Guardiola will make changes against a side that is looking increasingly doomed to a rapid return to the championship, but this looks like the sort of game where the first goal for City will be the most important against a rival that is likely to sit deep.

As it was in Wednesday's 3-0 win over Brighton, patience could be a virtue for City fans.

Liverpool entertain Everton in a Merseyside derby on Sunday and could go into the game four points off the top of the table in case of a City victory.

Under normal circumstances, Jurgen Klopp's men would expect to blow away their neighbors, who are struggling just a point above the relegation zone, but Liverpool also have little recovery time before their Champions League semifinal against Villarreal on Wednesday and Klopp will almost certainly make some changes to his starting 11.

Liverpool thrashed Everton 4-1 at Goodison Park earlier this season and a repeat of that could see Frank Lampard's side drop into the bottom three.

The weekend kicks off with a key battle in the race for Europe as Arsenal, fresh from their 4-2 win away to Chelsea, entertain Manchester United.

It has been an eventful week for Man United, who were humiliated 4-0 at Anfield a week ago and named Eric Ten Hag as their new coach earlier this week. Defeat at the Emirates would likely mean Ten Hag's first season in charge will be without the 'distraction' of Europe next season.

There will be emotions on display when Tottenham travel to face Brentford, who have improved drastically with five wins in six games since former Spurs hero Christian Eriksen returned to action following his heart attack. Tottenham travel in fourth place, although that could have changed depending on the result at Arsenal.

Elsewhere on Saturday, Aston Villa look to stop an alarming run of four consecutive defeats when they travel to face an in-form Leicester City, while Newcastle aim to make it four successive wins, when they visit bottom of the table Norwich.

As well as the Merseyside derby, Sunday sees Chelsea entertain West Ham, needing a win on the back of their 4-2 midweek defeat at home to Arsenal. Another defeat could mean that Chelsea's top-four finish would look less secure than it did a week ago.

Brighton face Southampton in a south-coast derby with nothing but pride to play for, while Burnley have a crucial match at home to the Wolves. A 2-0 win at home to Southampton on Thursday kept Burnley just a point behind Everton and three more points would lift the 'Clarets' above Everton before the ball gets rolling at Anfield, piling extra pressure on their relegation rivals.