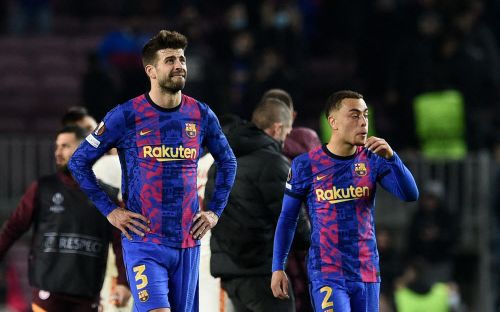 Paris: Barcelona stumbled to a goalless draw with Galatasaray in their Europa League last-16 first leg at the Camp Nou on Thursday, while Rangers cruised into a 3-0 lead in their tie against Red Star Belgrade.

But it was their Turkish visitors who almost grabbed a lead ahead of the return game in Istanbul next week, with Bafetimbi Gomis only denied a winner by a VAR review for offside.

Jordi Alba, Ousmane Dembele and Frenkie de Jong all went close in the second period for Barcelona, but the hosts could not find a breakthrough.

"The feeling is bad," Xavi admitted to Movistar+. "It's not a good result, playing at home and dominating so much.

"This is Europe, even if it's the Europa League, and teams are there on their own merits."

Xavi's side are still unbeaten in 90 minutes since defeat by Bayern Munich in their final Champions League group game last year.

But the Catalan giants will likely have to find a victory next Thursday to extend their bid to win this competition for the first time.

Rangers took a big step towards reaching the quarter-finals for the first time since losing the 2008 UEFA Cup final to Zenit Saint Petersburg.

Giovanni van Bronckhorst's men backed up their stunning win over Borussia Dortmund in the play-off round with another dominant first-leg performance against Red Star at Ibrox.

James Tavernier's penalty and Alfredo Morelos' 28th career goal in the tournament put the home side in command.

The Scottish champions took full advantage, with Leon Balogun adding a third six minutes after the break to put the Glasgow giants in total control heading into the second leg.

"It's an unbelievable achievement," Rangers captain Tavernier told BT Sport. "We are only halfway there but the boys were brilliant.

"We really managed it well and we've put ourselves in a good position. We can't be complacent, though and we'll go in there like it's 0-0."

Atalanta will take a lead to Germany next week after Luis Muriel scored twice in a 3-2 win over Bayer Leverkusen in Bergamo.

Elsewhere, Abel Ruiz scored in the first minute as Braga beat Monaco 2-0 in Portugal, while Munir El Haddadi gave Sevilla a 1-0 home win over West Ham in the early kick-off.

There were goals galore in the third-tier Europa Conference League, with PSV Eindhoven and FC Copenhagen playing out a remarkable 4-4 draw.

The Danish visitors led 3-1 and 4-3 at the Philips Stadion, but Eran Zahavi grabbed an equaliser with five minutes remaining for PSV after Cody Gakpo had scored twice and missed a spot-kick.

Leicester saw off French side Rennes 2-0 at the King Power Stadium as Kelechi Iheanacho's injury-time effort added to Marc Albrighton's opener on the half-hour mark.

"This was a really tough draw for us against a really good side," said Leicester manager Brendan Rodgers.

"I thought the players were fantastic. The concentration level was very good."

Jose Mourinho's Roma claimed a 1-0 win at Vitesse Arnhem and Marseille conceded a late goal in a 2-1 success against FC Basel at the Stade Velodrome.

Feyenoord romped to a 5-2 thrashing of Partizan Belgrade in Serbia in a bad night for the country's capital clubs, and Slavia Prague saw off LASK Linz 4-1.

Malinovskyi 'No War in Ukraine' message after goal