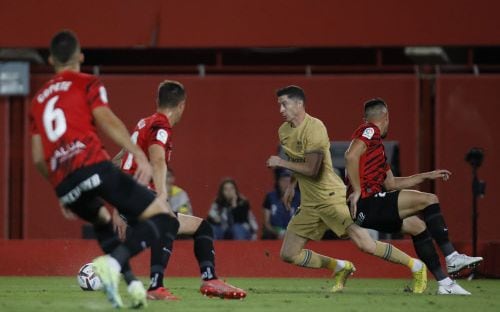 Marc-Andre ter Stegen kept a fifth consecutive clean sheet in the top flight and, along with Lewandowski's brilliantly taken strike in the 20th minute, it was enough to put Barcelona one point clear of Real Madrid, who host Osasuna on Sunday.

Earlier Atletico Madrid cruised to a 2-0 win over a toothless Sevilla, increasing the pressure on Julen Lopetegui.

Marcos Llorente and Alvaro Morata's goals took Atletico provisionally up to sixth, while leaving the hosts 16th, just a point above the relegation zone.

In Mallorca, Xavi Hernandez's side demonstrated they are ironing out the creases which caused them so many problems last season, improving both defensively and in attack, with the relentless Lewandowski leading the charge.

Ter Stegen, who has started this season in top form, beat his own personal record of 500 minutes without conceding in La Liga, reaching 534 minutes and counting.

At the other end, Lewandowski leads the scoring charts in Spain on nine goals from seven games, after clinically curling into the bottom corner to break the deadlock against Mallorca.

"This win will help us ahead of some very tricky weeks," Ter Stegen told Movistar.

"The record isn't as important as the win. I'm sure it will give me confidence. These wins put you in a good dynamic, these games mean a lot.

"They help us maintain the pressure on Real Madrid."

Xavi deployed young left-back Alejandro Balde out of position on the right side of his defence because of injuries to Ronald Araujo, Jules Kounde and Hector Bellerin, and brought Ansu Fati into the starting line-up.

It was the 19-year-old's first start in La Liga since November 2021, after a string of injury problems, and his burst forward contributed to Barcelona's opening goal.

The winger, left out of Luis Enrique's most recent Spain squad and desperate to impress to try and get the call-up for the World Cup, fed Lewandowski, who cut inside and finished like few others can.

Mallorca should have levelled 15 minutes later but Marc-Andre ter Stegen made a superb save to deny Jaume Costa from close range.

Barcelona struggled to create more openings and the game threatened to boil over, with a flurry of bookings and Xavi's assistant and brother, Oscar Hernandez, being issued a red card for apparent dissent.

Kang-in Lee sent a shot agonisingly wide of the far post as Mallorca tried to hit Barcelona on the counter at the death.

In previous seasons Barcelona might have caved, but Xavi's side are starting to prove their fortitude.

"Generally we did very well, we limited them to just two chances, Ter Stegen made a brilliant save and Lewandowski scored a great goal," said Xavi.

"(However) it would be poor to limit it to that. We defended very well. They are players that make the difference, but I would say the team competed well."

At the Ramon Sanchez-Pizjuan and with only one win from seven league games, Sevilla supporters jeered their own side.

Sevilla coach Lopetegui said he would focus on the things he could control, amid speculation the club are considering his future.

"I'm focused on what's up to me, these are circumstances intrinsic to football," said Lopetegui.

"The situation is not one we wanted. I'm sure the team will turn it around. I am sad today, being weak is something else."

Atletico dominated, with Morata missing two big chances and Llorente drilling into the far corner in the 29th minute, beyond the reach of Bono.

After a mistake by Jose Carmona, Morata doubled the lead before the hour mark, neatly lofting home.

Only impressive saves from Bono prevented Cunha and substitute Antoine Griezmann from adding to Atletico's lead, as they answered their critics after derby defeat by Real Madrid.

"The team was a team again, we worked all together," Atletico coach Simeone told DAZN.

Earlier Villarreal, sixth, could not find a way past Cadiz goalkeeper Jeremias Ledesma in a 0-0 draw on the road, while Real Valladolid won 3-2 at Getafe. AFP