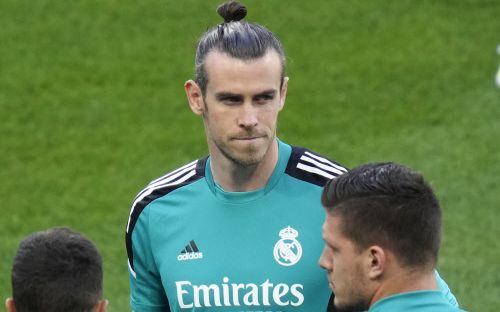 Madrid: Gareth Bale wrote a farewell letter to Real Madrid on Wednesday, the Welshman bringing an end to his nine-year spell at the Spanish club, where he said his "dream became a reality".

Bale will leave Real Madrid when his contract expires at the end of June, with the 32-year-old yet to confirm what he will do next.

His future is likely to depend on whether Wales qualify for the World Cup in Qatar, with retirement a possible option if they miss out.

"I write this message to say thank you to all my teammates, past and present, my managers, the backroom staff and to the fans that supported me," Bale wrote in a letter to Real Madrid, posted on social media in both English and Spanish.

"I arrived here nine years ago as a young man who wanted to realise my dream of playing for Real Madrid. To wear the pristine white kit, to wear the crest on my chest, to play at the Santiago Bernabeu, to win titles and to be part of what it's so famous for, to win the Champions League.

"I can now look back, reflect and say with honesty that this dream became a reality and much, much more.

"To be a part of this club's history and to achieve what we achieved while I was a Real Madrid player has been an incredible experience and one I will never forget.

"I also want to thank president Florentino Perez, Jose Angel Sanchez and the board for giving me the opportunity to play for this club. Together we were able to create some moments that will live forever in the history of this club and football. It has been an honour."

After joining Madrid from Tottenham for 100 million euros in 2013, Bale went on to win 16 major trophies with Real Madrid, including five Champions Leagues, three La Ligas and one Copa del Rey.

More than his trophies, Bale will be remembered for a handful of spectacular moments, including his two goals scored off the bench against Liverpool in the 2018 Champions League final in Kiev, the first coming from a stunning bicycle kick.

He scored another hugely important goal in the 2014 Champions League final in Lisbon, his header at the back post giving Real Madrid the lead against Atletico Madrid in extra-time, as they went on to win the club's long-awaited 10th European Cup.

Perhaps most memorable was Bale's incredible solo goal at Mestalla to win the 2014 Copa del Rey final against Barcelona.

Bale's popularity with the Real Madrid fans, though, has plummeted in recent years as injuries and a perceived lack of commitment pushed him to the fringes of the first team.

He was barely on speaking terms with Zinedine Zidane by the end of the 2017-18 season and hopes that Cristiano Ronaldo's departure might revive his Real Madrid career were never realised.

A frosty relationship with the Spanish press harmed his reputation, with aspects of his personal life - including his passion for playing golf and a lack of fluency in Spanish - increasingly used to support the idea he had lost interest in his Real Madrid career.

The issue exploded in 2019 after Bale celebrated Wales' qualification for Euro 2020 by standing behind a flag that read: "Wales. Golf. Madrid. In that order."

Despite his heroics in the Champions League final in 2018, Bale's role had already been significantly reduced that season under Zidane and his influence continued to dwindle even as new coaches like Julen Lopetegui, Santiago Solari, Zidane again, and most recently, Carlo Ancelotti, took charge.

Last season, Bale played only five times in La Liga and seven minutes in the Champions League, again saving his best for Wales, as he scored a hat-trick against Belarus in September and then twice against Austria in March to keep their World Cup qualification hopes alive. AFP

Centre writes to 5 states including Kerala over rise in Covid cases, weekly ...