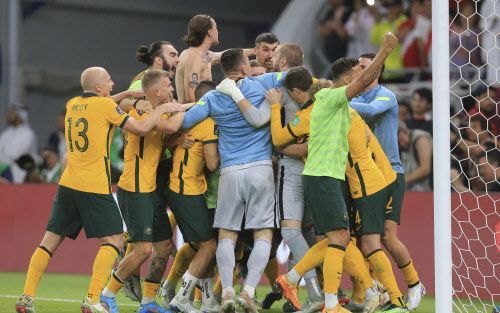 Australian players celebrate after winning in a penalty shoot-out | AP

Sydney: Australia erupted in celebration Tuesday after the Socceroos made a fifth straight World Cup, with football superstar Sam Kerr leading the charge, telling the doubters to "eat your hats".

Graham Arnold's men stunned Peru in a penalty shootout in Doha to clinch the penultimate spot at the global showpiece this year, with substitute goalkeeper Andrew Redmayne the hero.

It was an extraordinary turnaround for a team that won 11 games on the trot during qualifying before a slump forced them into a do-or-die qualifier against the United Arab Emirates and then Peru.

But with doubts mounting and coach Graham Arnold's job on the line, they beat UAE 2-1 last week, then crushed Peruvian dreams 5-4 on penalties after the match finished 0-0 after extra-time.

A host of former Australian players were equally ecstatic, with Socceroos all-time top goalscorer Tim Cahill admitting there were "so many emotions".

"But the main thing is this team showed up when it counted. To all the staff and players, congratulations," added the retired Cahill, who played in the last four World Cups.

Luke Wiltshire, who played 80 times for Australia, told local television the result would go down in Australian football folklore.

"People had written them off. They went the hard way, they turned up on the night and performed. We saw bravery and character," he said.

Arnold had previously called on Albanese to give Australians the day off to celebrate following Tuesday's early morning kick-off, but that failed to materialise.

Australia will face France, Denmark and Tunisia in Group D at the World Cup, with Arnold firmly back in charge, having survived mounting calls to be sacked after their failure to qualify automatically.

"The doubters don't bother me, it is these boys I care for, the game I care for," he said after ensuring Australia will once more be on the world stage. AFP