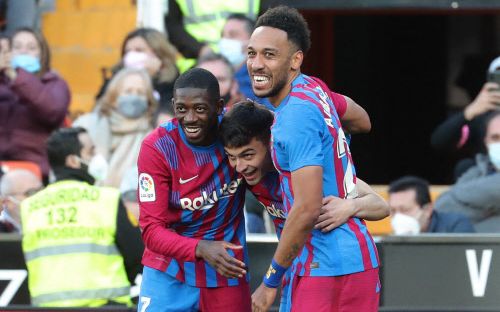 Madrid: Pierre Emerick-Aubameyang marked his first La Liga start for Barcelona with a hat-trick on Sunday as the Catalans thrashed Valencia 4-1 to climb back into La Liga's top four.

Aubameyang scored twice in the first half either side of a Frenkie de Jong tap-in as a free-flowing Barca hit Valencia with three goals in 15 minutes before the interval.

And while Valencia briefly raised hopes of a comeback when Carlos Soler headed home Bryan Gil's cross, a long-range Pedri strike flew in off Aubameyang's back to complete an impressive victory.

In his post-match interviews, Aubameyang believed the fourth goal was Pedri's but Barcelona later confirmed the referee had attributed it to Aubameyang, giving the Gabonese striker his hat-trick.

It is the 32-year-old's first treble since August, when he put three past West Brom for Arsenal, and the first time anyone has hit a hat-trick for Barca since Lionel Messi scored four against Eibar in February 2020.

"It's a luxury to have a player like him arriving for free," said Sergio Busquets.

"When he arrived he hadn't played many minutes but he's getting them now and I hope he helps us like he has today because he's a great player."

Aubameyang had made two substitute appearances in La Liga before starting against Napoli in the Europa League on Thursday, but this was his first league start for Barcelona since having his contract terminated by Arsenal last month.

The third goal might have been Pedri's in all but name but Aubameyang was at his pin-point best for the first, as he raced clear and unleashed an emphatic finish.

Xavi singled out Pedri for special praise. "There's nobody in the world with his talent and he's only 19," Xavi said.

Barcelona's quick-fire treble began with a simple chip over the top from Jordi Alba but Aubameyang still had work to do, the striker taming the ball on its third bounce before firing it high into the net under pressure from Omar Alderete.

The second was more intricate, a superb team goal going through Busquets and Alba before Ousmane Dembele generously sidefooted across for De Jong to finish.

Dembele was key to the third too, as his through ball released Gavi, who crossed to the back post where Aubameyang tapped in a third.

Valencia thought they had a goal back before half-time through Soler's acrobatic finish but replays showed the ball had rolled out for what should have been a throw-in during the build-up.

Soler, though, scored shortly after the restart, heading in Gil's whipped cross from the left to revive Valencia, who pushed for a second, with Soler going close with a long-range drive.

But Pedri killed their momentum with his wonder-strike from distance, the youngster curling a stunning shot from 40 yards off Aubameyang's back and into the top corner, even if goalkeeper Giorgi Mamardashvili might have done better.

Sevilla had earlier stumbled again at Espanyol, another slip meaning they have now won only once in their last five league games.

Rafa Mir put Sevilla in front at Cornella but Sergi Darder equalised for Espanyol early in the second half.

Sevilla's pursuit of a winner was made harder by Jules Kounde being sent off with 14 minutes left, although Youssef En-Nesyri had a golden opportunity in injury-time, only to see his finish saved.

Anthony Martial, who joined Sevilla on loan from Manchester United in January, went off injured in the first half and could now miss next weekend's crunch derby at home to third-placed Real Betis. AFP