Goals from Javi Hernández (10th) and Edu Garcia (48th) gave ATK a two goal lead. Nerijus Valskis reduced the deficit in the 69th minute. However, Javi Hernández scored his second in the 94th minute to seal the result. 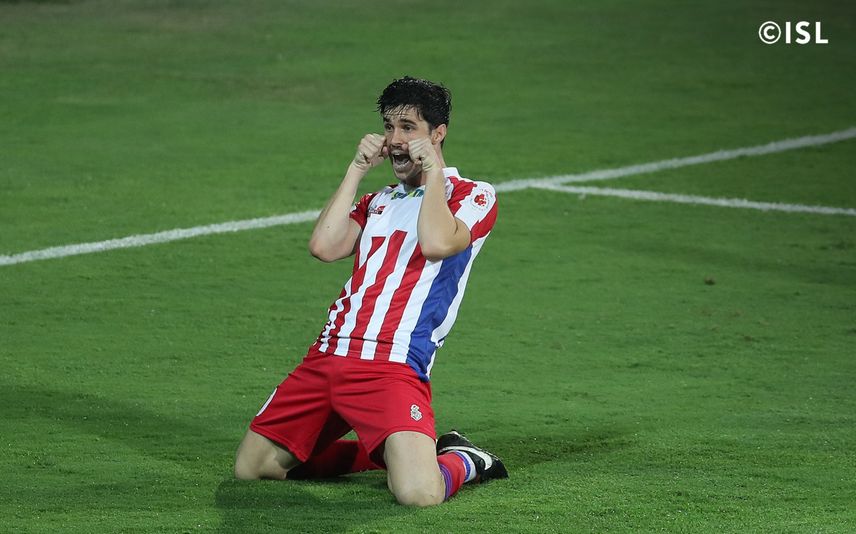 Goals from Javi Hernández (10th) and Edu Garcia (48th) gave ATK a two goal lead. Nerijus Valskis reduced the deficit in the 69th minute. However, Javi Hernández scored his second in the 94th minute to seal the result.

Both Owen Coyle and Antonio Lopez Habas kept their usual 4-2-3-1 and 3-5-2 formations. Coyle opted to start with Germanpreet Singh in the middle instead of Edwin Vanspaul. Other than that, both teams remained unchanged from their last matches.

The match started with both teams trying to take the initiative. The first chance fell for Chennayin FC in just after 60 seconds.

Andre Schembri got to the byline on the right and cut the ball back towards Rafael Crivellaro. An ATK defender gets a touch on the ball which distracted Crivellaro who tried to hit it towards goal. However, the Brazilian mishit the ball and it was looping into the goal. Another defender came across and cleared it away off the line.

Chennaiyin got a better chance just 2 minutes later. Germanpreet Singh galloped forward with the ball from midfield and found Andre Schembri. The winger fed Nerijus Valskis outside the box. The striker moved into the box, evaded a couple of challenges before hitting a thunderbolt of a shot with his left foot. Unluckily for Chennaiyin, the ball hit the underside of the cross bar and came out.

But the first goal was scored by ATK in the 10th minute. A long ball out from defence found Roy Krishna wide to the left. Eli Sabia moves wide to stop the striker, who finds a bit of space and whipped the ball into the middle. David Williams let the ball go past him deceiving Lucian Goian. Javi Hernández came running in and fired the ball into the ground which bounced into the top corner beating Chennaiyin keeper Vishal Kaith.

It was Javi Hernández’s first goal of the season and what a time and way to score.

Germanpreet Singh was forced off injured and was replaced by Edwin Vanspaul in the 22 minute.

ATK should have doubled their lead in the 23rd minute. Roy Krishna came in from the right and beat The two Chennaiyin centre backs with ease. He unleashed shot which was saved by Vishal Kaith. The ball then fell to Javier Hernandez who shoots at goal but the ball was cleared off the line by Laldinliana Renthlei.

Nerijus Valskis should have equalised in the 27th minute.

After an excellent one-two between Andre Schembri and Rafael Crivellaro inside the box, Nerijus Valskis was set free with a lovely pass. The forward takes a first-time shot but it's straight to Arindam Bhattacharja. He fumbles slightly but Pritam Kotal immediately comes to the rescue.

The ATK keeper saved another shot on goal just two minutes later. Rafael Crivellaro put in a cross which was intercepted by Sumit Rathi. The defender cannot keep it under control and the ball falls to Nerijus Valskis. The forward takes a shot from outside the box and Arindam Bhattacharja dives low to his right to parry the ball away.

Arindam Bhattacharja continued his heroics in the 31st minute. Rafael Crivellaro whips in a free-kick from the left. The ball was headed towards goal by Andre Schembri but Arindam on a full stretch dive to his right pushed the ball out of danger.

Roy Krishna came off with an injury and was replaced by Mandi Sosa in the 40th minute. Edu García moved up alongside David Williams. ATK went into the break with a narrow lead.

The second half started with Chennayin trying to attack and ATK happy to sit back and hit on the counter.

The plan worked brilliantly as Edu Garcia doubled their lead in the 48th minute. David Williams galloped forward with the ball and passed it to Edu Garcia running beyond him down the left. Williams was take out but Edu calmly slotted the ball into the bottom corner.

Lallianzuala Chhangte shot wide from just outside the box in the 52nd minute.

Regin Michael, who was on a yellow card for a high boot on Edwin Vanspaul was replaced by Pronay Halder in the 66th minute.

Nerijus Valskis pulled a goal back for Chennaiyin in the 69th minute. Anirudh Thapa released Laldinliana Renthlei down the right. The right back whipped in a cross which was put into the path of Valskis by Lallianzuala Chhangte. The Lithuanian fired it into the top corner.

Arindam Bhattacharja denied a well-timed header from Nerijus Valskis just one minute later to keep ATK in the lead after an Eli Sabia cross found the big man in the middle.

Armando Sosa fired a half clearance just over the bar in the 73rd minute. André Schembri was replaced by Dragoș Firțulescu in the 76th minute.

A long ball over the top from the ATK defence nearly found David Williams but Vishal Kaith came forward and cleared the ball just in the nick of time in the 80th minute.

Mandi Sosa was replaced by Víctor Mongil in the 84th minute. ATK FC are looking to shore up their backline. Javi Hernández scored his second in the 94th minute to seal the result in ATK’s favour.