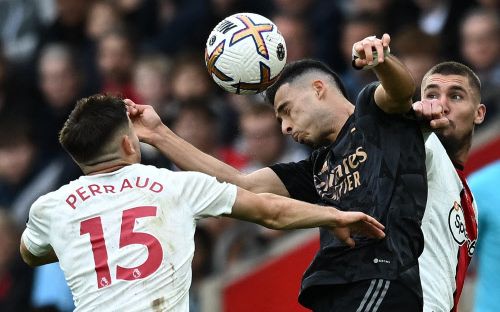 London: Premier League leaders Arsenal dropped points for just the second time this season in a frustrating 1-1 draw at Southampton, while Newcastle climbed to fourth place after punishing Hugo Lloris' mistakes in a 2-1 win at Tottenham on Sunday.

Arsenal looked set to move four points clear at the top of the table when Granit Xhaka continued his fine form by smashing home the opening goal at St Mary's after just 11 minutes.

Mikel Arteta's side dominated the first half, but failed to add to their advantage with Gabriel Jesus guilty of missing big chances either side of the break.

Arsenal were punished when Stuart Armstrong produced a composed finish to level 25 minutes from time.

Martin Odegaard smashed home as the league leaders pushed for a winner, but the goal was ruled out as the ball had already gone out of play prior to Kieran Tierney's cross.

A draw leaves Arsenal just two points clear of Manchester City at the top of the table.

"We were really good in the first half and created big chances that we didn't put away. In the Premier League, unfortunately, when you don't do that, you can pay the price," Arteta said.

Eddie Howe's side climbed into the Champions League places, two points behind third-placed Tottenham, after extending their unbeaten run to seven matches.

Bolstered by the substantial investment from their Saudi-backed ownership group, Newcastle look to have a bright future under Howe.

They have lost just once all season and took advantage of Tottenham's defensive frailties to hand Antonio Conte's men a second successive defeat.

Callum Wilson put Newcastle ahead in the 31st minute as he chased Fabian Schar's pass and collided with Tottenham goalkeeper Lloris.

Wilson was first to the loose ball and lobbed both Lloris and Eric Dier with a fine finish.

Newcastle doubled their lead five minutes before half-time when Lloris' poor attempted pass was headed down by Sean Longstaff to Miguel Almiron, who dribbled past Ryan Sessegnon and Clement Lenglet before firing home.

Harry Kane reduced the deficit six minutes into the second half when he headed in from Son Heung-min's cross, but Tottenham couldn't complete the comeback.

"It was a big win. We were determined to come here and be positive. My players deserve all the credit for how we attack the game," Howe said.

"There is a long way to go. I'm sure people will talk us up but I don't want to put any external pressure on my players."

Aston Villa responded to the sacking of Steven Gerrard with a 4-0 thumping of Brentford.

Former Liverpool captain Gerrard was the fall guy for Villa winning just two of their opening 11 league games with a 3-0 defeat at Fulham on Thursday the final straw.

Caretaker manager Aaron Danks did not shy away from big decisions as captain John McGinn was dropped to the bench and got an immediate reaction.

Leon Bailey fired Villa in front after just two minutes before the Jamaican teed up Danny Ings to make it 2-0.

Ings then added a third inside 14 minutes from the penalty spot before Ollie Watkins rounded off the scoring in the second half.

Wolves are not enjoying the same success under their caretaker boss Steve Davis as Leicester moved out of the relegation zone with a 4-0 win at Molineux.

Youri Tielemans' stunning strike that dipped into the top corner got the Foxes off to a flying start before Harvey Barnes' cool finish doubled the lead for Brendan Rodgers' men.

James Maddison and Jamie Vardy sealed Leicester's first away win against a side still in the Premier League for a year in the second half.

Leeds dropped into the bottom three after a 3-2 home defeat to Fulham. afp