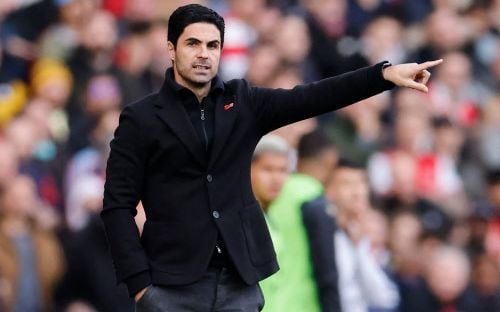 London: Mikel Arteta praised Arsenal's ability to ride out a second-half onslaught from Crystal Palace to make the perfect start to the Premier League season with a 2-0 win at Selhurst Park on Friday.

On the ground where the Gunners lost 3-0 in April to spark a late season collapse that cost them a place in the Champions League, Arteta's men held out after Gabriel Martinelli's header gave them a deserved half-time lead.

Marc Guehi's own goal late on then sealed the three points after Odsonne Edouard and Eberechi Eze had missed big chances for Palace.

"The win is the most important thing. To win the first match it builds confidence, momentum and then we can discuss the things we have to improve," said Arteta.

"To win here you need to suffer. We've done it and that is part of the mentality we want to build."

Arsenal were beaten 2-0 at Brentford on the opening night of last year's season, which triggered their worst start to a league campaign for 67 years.

But they backed up their blistering pre-season form and rewarded the faith placed in Arteta with over £100 million ($120 million) to spend in the transfer market.

Gabriel Jesus' arrival to fill the need for a centre-forward has been Arsenal's marquee signing of the summer and the Brazilian nearly marked his debut in style after just four minutes.

Jesus slalomed through the centre of the Palace defence and when his initial effort was blocked, Martinelli should have done better than slot the rebound wide of the target.

The visitors were utterly dominant in the opening quarter, but it took a set-piece to make the breakthrough.

Another debutant Oleksandr Zinchenko nodded a corner back across goal and Martinelli's header had just enough power to beat Vicente Guaita.

Palace had suffered a far more problematic pre-season with a number of key players left at home during a tour of Australia due to their coronavirus vaccination status.

The Eagles took half an hour to find their feet, but will be disappointed not to have at least taken a point once they got to the tempo of the game.

Arsenal were guilty of causing their own problems in raising the Palace fans from their slumber as a clearance from Aaron Ramsdale was charged down and fortunately for the England goalkeeper rebounded to one of his own defenders.

Ramsdale made amends before the break with a fine stop to deny Edouard's header levelling before the French striker had another effort deflected inches over the bar.

Palace penned Arteta's men back in the second period, but again failed to take their chances when they came along.

Eberechi Eze was the most guilty as he fired tamely into Ramsdale's body with just the Arsenal number one to beat.

"The difference between the two teams is they score the goals," said Palace boss and former Arsenal captain Patrick Vieira.

"We created two really good chances to score and we didn't take our chances."

Arsenal had barely even threatened on the counter-attack in the second half, but got lucky to give themselves breathing space for the final five minutes.

Bukayo Saka's driven cross caught his England teammate Guehi off guard as the Palace centre-back's header flew into his own net. AFP