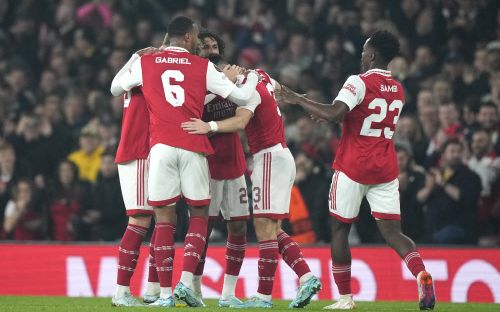 Manchester: Arsenal beat Chelsea 1-0 to dispel doubts over their Premier League title credentials and go top of the table on Sunday as Manchester United were blown away 3-1 by an inspired Aston Villa on Unai Emery's bow as boss.

United are now three points off the top four after Newcastle continued their fine form with a 4-1 win at Southampton to go third.

Gabriel Magalhaes bundled in Bukayo Saka's corner for the only goal at Stamford Bridge, but the slender margin of victory was the very least Arsenal deserved.

Chelsea offered barely anything going forward as they slipped to back-to-back Premier League defeats for the first time in two years.

"For such a young team, the maturity, the composure they showed, the resilience and courage to play how we wanted to play was phenomenal to do it against these kind of players," said a proud Arsenal manager Mikel Arteta.

"Winning in this stadium is an extra thing, another step for this team to keep believing they can do it under pressure and against big opponents."

Victory takes Arsenal back two points clear of Manchester City at the top of the table.

Crucially for Arteta's men after six seasons outside the Champions League, their lead over fifth-place now stands at 11 points.

Chelsea remain in seventh, behind Brighton, who Graham Potter left in September to take charge of the Blues.

United were unbeaten in nine games as the Red Devils appeared to be taking shape under Erik ten Hag.

But despite the lavish amounts spent to assemble the United squad, a lack of strength in depth was exposed with Antony, Jadon Sancho and Raphael Varane missing due to injury and Bruno Fernandes suspended.

Emery could not have asked for a better start to his time in charge of Villa as Leon Bailey smashed across David de Gea and Lucas Digne's free-kick found the top corner inside 11 minutes.

Luke Shaw's strike that deflected off Jacob Ramsey into his own net gave the visitors hope just before half-time.

Villa, though, quickly restored their two-goal lead when Ramsey side-footed into the top corner on 49 minutes.

Cristiano Ronaldo captained United just weeks after being disciplined for refusing Ten Hag's orders to come on as a substitute.

On another frustrating afternoon for Ronaldo, the five-time Ballon d'Or winner survived a VAR review for a red card after clashing with Tyrone Mings.

Newcastle's sixth win in seven games took them above Tottenham into third for a few hours at least.

Miguel Almiron continued his stunning form with a seventh goal in as many games to open the scoring in sodden conditions at St. Mary's.

The onlooking England manager Gareth Southgate then had to suffer two injury scares as Kieran Trippier required treatment on a muscle injury before Callum Wilson was replaced at half-time.

There was no way back for Ralph Hassenhuttl's men once Chris Wood made the most of his rare chance to impress as Wilson's replacement by curling into the far corner before Trippier set up Joe Willock to make it 3-0.

Romain Perraud pulled a goal back a minute from time, but Newcastle had the final word when Bruno Guimaraes curled into the bottom corner to leave the Saints still rooted in the relegation zone.

Spurs can leapfrog the Magpies back into third should they inflict a third consecutive league defeat on Liverpool later on Sunday.

Michael Olise struck the winner for Crystal Palace deep into stoppage time as a 2-1 win at West Ham lifted the Eagles up to ninth.

Salah double fires Liverpool to away win at Tottenham