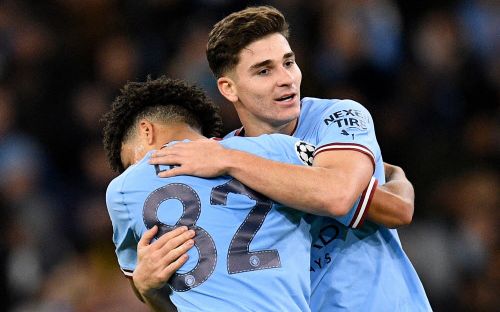 Manchester: Julian Alvarez stepped into the void left by Erling Haaland with a goal and two assists as Manchester City came from behind to beat Sevilla 3-1 on Wednesday.

The English champions were without Haaland due to a foot injury and with top spot in Champions League Group G already assured, Guardiola took the opportunity to leave Kevin De Bruyne, Rodri, Bernardo Silva and Joao Cancelo on the bench.

A much-changed City side trailed at the break to Rafa Mir's towering header.

But 17-year-old Rico Lewis levelled on his full debut early in the second half before De Bruyne's sublime pass set up Alvarez for his fourth City goal.

The Argentine then teed up Riyad Mahrez to complete the comeback seven minutes from time.

"One of the reasons why it is a great night is for Julian," said Guardiola. "He made two assists and a goal.

"We know how good he is and the quality he has. Today he was patient."

Haaland was unstoppable when the sides met in September with City running out 4-0 winners.

Without the Norwegian, Guardiola's men have lacked the same firepower with just four goals in their previous five games.

The Premier League champions dominated possession but struggled to make it count before half-time.

Ilkay Gundogan came closest as he fired just wide after a well-worked one-two with Phil Foden.

Sevilla have endured a nightmare season so far as they sit in the relegation zone of La Liga.

Jorge Sampaoli's men were also guaranteed to finish third in the group before kick-off, but showed plenty of spirit in the first 45 minutes at the Etihad.

Mir had already forced Stefan Ortega into a save low to his right before the Spanish striker opened the scoring.

Isco's deep corner found Mir unchallenged as he powered a header into the far corner.

Guardiola shook things up at half-time with the introduction of Rodri for Jack Grealish.

The Spanish international restored some order for City with Foden more dangerous pushed out on the left.

However, it was an unlikely hero who got the equaliser.

Lewis had played just 68 minutes for the City senior team in four substitute appearances prior to being handed his full debut.

The right-back kept a cool head with a thumping finish high past Bono from Alvarez's clever pass.

De Bruyne was introduced for the final 20 minutes and took just three to make a telling contribution.

The Belgian curled a pass in behind the Sevilla defence for Alvarez to round Bono and fire high into the unguarded net.

Alvarez then showed another side to his game by winning back possession deep inside the Sevilla half and unselfishly squaring for Mahrez to smash into the top corner. AFP