ATK Mohun Bagan thus became the first Indian club in AFC Cup history to top the group and qualify for the knockout stage after losing their opening group-stage game. 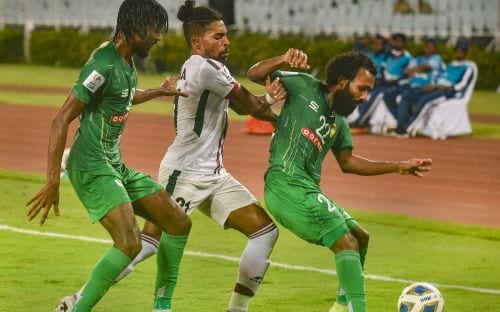 Kolkata: India's ATK Mohun Bagan dished out a dominant performance to book their place in the AFC Cup inter-zone semi-finals with a resounding 5-2 win over Maziya Sports & Recreation to top Group D here on Tuesday.

ATK Mohun Bagan thus became the first Indian club in AFC Cup history to top the group and qualify for the knockout stage after losing their opening group-stage game.

Joni Kauko (26' 37') starred as Juan Ferrando's men ensured that there were no shocks on the final matchday.

Kauko produced a well-placed finish from the edge of the box to put ATK Mohun Bagan into the lead.

Then, Kauko got into the box to chase a ball, brought it under his control and placed a fine shot into the back of the Maziya net to ensure a two-goal cushion for his team.

After the break, Roy Krishna (56') received a ball from a cross by Subhasish and slotted it home to regain his team's two-goal lead.

Just two minutes later, Subhasish (58'), who provided the assist for the third goal, wrote his name into the scoresheet with a neat finish from a Liston Colaco free-kick to make it 4-1 in favour of the Mariners.

Carl McHugh (71') added Bagan's fifth goal of the night before Tana completed his brace with a well-placed header from inside the box.

Tana scored both the goals for Maziya, in the 45th and 73rd minute respectively.

Both ATKMB and Bashundhara ended on same points. But ATKMB made it to the inter zone semifinals on the basis of head to head record.

Under the tournament rules head to head result come first to decide which team advances when the teams are on equal points. ATKMB had beaten Bashundhara earlier.

Earlier in the day, reigning I-League champions Gokulam Kerala suffered a 1-2 defeat at the hands of Bangladesh's Bashundhara Kings.

Captain Robinho was outstanding for the Bangladeshi champions, scoring one brilliant goal and setting up another.

With all four teams in the group starting the final match-day on three points, both Gokulam Kerala and Bashundhara had all to play for and both went close to scoring within five minutes, with Robinho seeing an effort deflected wide at one end, and Jithin MS going close at the other.

But the Bangladeshi side took the initiative from then on, racking up 14 shots to three in the first half, seven of which were taken by the lesser-known Robinho, who forced Rakshit Dagar into a brilliant save on 27 minutes as pressure grew on the Kings' I-League opponents.

The Brazilian was virtually a one-man attack for Bashundhara at times, and the only surprise when he opened the scoring on 36 minutes was the brilliance of the strike, as he tricked his way past a pair of defenders before curling in a sensational 20-yard effort, which will surely rank among the goals of the tournament at season's end.

Robinho then turned provider, floating in a delightful cross from the left-hand side, with Marong's thumping header too much for Dagar to handle in the 54th minute.

Gokulam Kerala's then carved out a lifeline when Jourdain Fletcher arrowed a low strike into the net following Mohammed Jassim's cross with a quarter of an hour remaining.

With Fletcher hammering a free kick against the crossbar in the 90th minute, the Kerala side pushed hard for an equaliser, but their failure to find it signalled the end of their AFC Cup campaign. PTI