Advantage Chennaiyin after 4-1 win against Goa 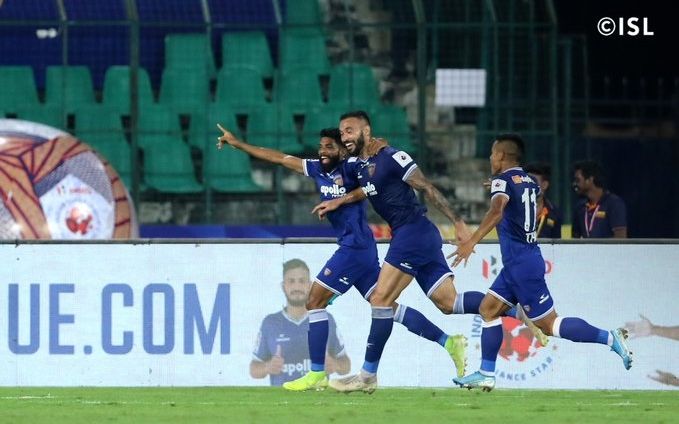 Chennai: Chennaiyin FC will take a three goal advantage when they travel to face FC Goa in the second leg of the semi-final of Indian Super League after a 4-1 win at the Jawaharlal Nehru Stadium here on Saturday.

Both Owen Coyle and Clifford Miranda chose to deploy their teams in a 4-2-3-1 formation. While Chennaiyin fielded arguably their best starting 11, FC Goa were missing two key players in Hugo Boumous and Brandon Fernandes.

The game had a cagey opening with both teams battling for supremacy in the midfield. Chennaiyin made the better attacking and defensive moves but were let down by lack of quality in the final third. Meanwhile, FC Goa found it difficult to break down the resolute home defense.

Goa clearly felt the absence of Hugo Boumous and Brandon Fernandes. Moreover, Ferrán Corominas did not look like he was enjoying the number 10 role playing in behind Manvir Singh.

The most notable moment of the entire first half came when Nerijus Valskis hit the bottom of the post from a free kick in the 43rd minute.

Chennaiyin started the second half brightly and took the lead through captain Lucian Goian in the 54th minute.

A free kick from the left was lobbed into the box. Goa keeper Mohammad Nawaz rushed out to punch it clear but missed it completely. Lucian Goian leaped high, got to the ball before the keeper and headed it into the net.

An attack was thwarted and the ball was cleared outside the box. However, it fell to Jerry Lalrinzuala who passed it to Anirudh Thapa. The midfielder took a couple of touches and cut inside before unleashing a belter of a shot from outside the box. The ball went around Mourtada Fall and landed in the right top corner. Keeper Nawaz had no chance of getting to it.

Chennaiyin made it 3-0 in the 77th minute through Eli Sabia. Nerijus Valskis made a run down the left flank and reached near the byline. The striker put in a low cross into the box which Eli Sabia poked into the net.

FC Goa conceded the fourth just two minutes later. Rafael Crivellaro passed the ball to Anirudh Thapa from left midfield. Thapa eased the ball into the path of Lallianzuala Chhangte from the left side of the box. Lallianzuala Chhangte could have squared it into the six-yard box but opted to put his laces through it. It was another thunderbolt of a shot. The ball went past Mohammad Nawaz and into the back of the net.

Goa pulled a goal back in the 85th minute through Saviour Gama. Ahmed Jahouh lofted the ball into the box and Lucian Goian stretched his leg out to in an attempt to clear it. However, it was a clumsy effort and the ball rolled loosely into the middle of the box. Saviour Gama ran on to it and did well to deflect it past keeper Vishal Kaith for a goal.

Despite scoring an away goal, Clifford Miranda and FC Goa have a massive job on their hand in the second leg of the semi-final at the Jawaharlal Nehru Stadium in Goa. With the three goal advantage, Owen Coyle and Chennaiyin will be confident of making it to the final.

Salah double fires Liverpool to away win at Tottenham

Britney Spears suffers nerve damage on right side of her body