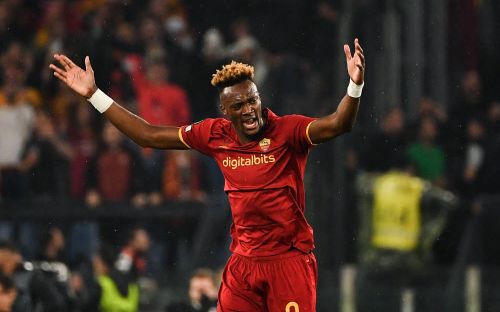 Rome: Tammy Abraham fired Roma into the inaugural final of the Europa Conference League on Thursday with the only goal in a 1-0 win over Leicester City which put the Italian side through 2-1 on aggregate.

Abraham smashed home a powerful header in the 11th minute at a bouncing Stadio Olimpico in Rome to put Jose Mourinho's team into their first European final in more than three decades.

They await Feyenoord in Albanian capital Tirana on May 25 after the Dutch side prevailed 3-2 in the other semi-final, and they will be backed by an army of supporters who got behind their team in stirring fashion.

After the match Roma announced tickets for the final would be distributed for free to season ticket holders, a reward for the phenomenal support shown to a team which currently sits fifth in Serie A.

"Before the game started, the fans won us this game," Abraham told BT Sport after netting his 25th goal of the season.

"We weren't even on the pitch and we heard them. The win was for them and my team. Hopefully we can go all the way."

Roma fans have not seen their team win a trophy since 2008 and the roar let out at the final whistle was one of massive relief after spending much of the match on the back foot against the Foxes, themselves gunning for a first major continental final.

Brendan Rodgers' team ran into the ground against a typically well-organised Mourinho side who were content to let Leicester do the running and try to pick the away side off on the break once their aggregate advantage was established early on.

"They were better than us in the first half even if they didn't create much," Rodgers told reporters after the match.

"We had a lot of the play in the second half but we couldn't make the breakthrough. Our Achilles heel all season has been set pieces and it was again tonight."

Roma's last European final -- in the old UEFA Cup -- was lost to Inter Milan in 1991 and the pre-match atmosphere was as feverish as could be expected for one of Europe's most passionate and long-suffering fan bases.

"I shed a tear because my emotions were with everyone who loves this club," said an exhausted Mourinho.

"This is a giant club without the trophy room in relation to the social dimension of the club. This is not a trophy it's a final but it means a lot to them."

A crowd of 65,000 had already been whipped up by a strong start for the home team when Abraham almost brought the roof off, meeting Lorenzo Pellegrini's corner with a header that flew past Kasper Schmeichel.

The England international's goal was just reward for Roma's enterprising start which featured smart Schmeichel stops, but as the half wore on Leicester shook off the cobwebs and started to get a foothold.

From there the match settled into a pattern of Leicester trying to push past a well-organised Roma rearguard, initially without success as the away side did not have a single shot on target in the opening period.

Leicester's first effort on target did not come until 11 minutes from the end, when James Maddison's low drive was easily collected by Rui Patricio and after that the hosts had some decent opportunities themselves.

The impressive Nicola Zalewski had a decent shot charged down when a cross was deflected into his path and Roma began to gain some ground as Leicester tired from their ineffective efforts.

Leicester pushed for a leveller but, as the whistles reached ear-splitting levels, Roma held strong and once Pellegrini's long-range effort was fumbled out for a corner in the final moments Roma knew they had done enough to write another chapter in the history of the Eternal City. AFP