Deshorn Brown scored in the 31st minute after ATK keeper Arindam Bhattacharya spilled the ball. Nishu Kumar was sent off for bringing down a marauding Roy Krishna just outside the Bengaluru penalty box in the 83rd minute. 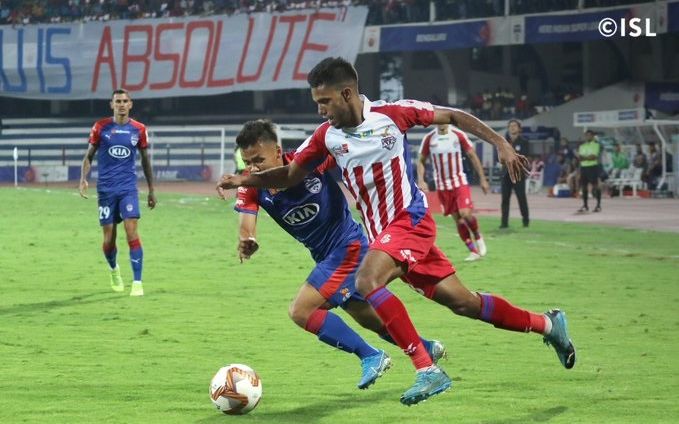 Bengaluru: Despite going down to 10-men, hosts Bengaluru FC defeated ATK FC 1-0 in the first leg of the second semi-final in Indian Super League at the Sree Kanteerava stadium here on Sunday.

Deshorn Brown scored in the 31st minute after ATK keeper Arindam Bhattacharya spilled the ball. Nishu Kumar was sent off for bringing down a marauding Roy Krishna just outside the Bengaluru penalty box in the 83rd minute.

Carles Cuadrat altered his favoured 4-3-3 formation to match and Antonio López Habas’ 3-5-2 on paper. However, Bengaluru defended in a back four with left wingback Nishu Kumar slotting into his usual left back position.

Sunil Chhetri moved to the left whenever Bengaluru had the ball while Harmanjot Khabra maintained the width on the other side. The tactic helped Bengaluru pin back ATK’s flying full backs Prabir Das and Michael Soosairaj.

David Williams put the ball in the net for ATK in the 17th minute but it was chalked off for handball as the Australian handled the ball while controlling a pass from his strike partner Roy Krishna. It was an excellent and brave decision from the linesman.

Apart from the disallowed goal, Bengaluru FC dominated the first half and were rewarded for their efforts with Deshorn Brown scoring in the 31st minute.

A Bengaluru attack was thwarted by the ATK defense which forced Sunil Chhetri on the left to go back to his keeper Gurpreet Singh Sandhu, who had advanced to the centre circle.

Chhetri went back to the left flank to collect the long ball from the keeper and headed it into the path of centre back Juanan, who had stayed forward. The defender tried to slot the ball low into the bottom far corner but it was not the best of efforts. ATK keeper Arindam Bhattacharya dived to his left to collect the ball but spilled it. Deshorn Brown gambled and slotted the ball into the net before anyone could react.

It was a howler from Arindam Bhattacharya that gifted the goal for the defending champions.

The home team continued their dominance in the second half also. Deshorn Brown’s effort was pushed away by the ATK keeper in the 42nd minute.

ATK looked clueless in the final third and were reduced to testing Gurpreet Singh Sandhu from a distance. Bengaluru continued to make the best use of their threat from set-piece situations.

Kevaughn Frater, who replaced Serran in the second half, produced a flying one handed save from Arindam Bhattacharya in the 76th minute.

Nishu Kumar was sent off for bringing down a marauding Roy Krishna just outside the Bengaluru penalty box in the 83rd minute.

A Dimas Delgado corner headed on by Eric Partalu was well collected by David Williams inside his own penalty box. Instead of thumping the ball clear, the Australian galloped forward through the middle getting away from a number of Bengaluru defenders. He then found Roy Krishna with a through ball. Nishu Kumar tried to chase down the Fijian but ended up bringing him down inside the D just outside his penalty box. Referee blew the whistle and showed a straight red for the Bengaluru defender. The defending champions were down to 10-men with seven minutes and added time to go.

ATK could not make anything from the resulting free kick as Bengaluru defended well. Despite their numerical disadvantage, Bengaluru held on to the lead.

Bengaluru FC should be relieved about the victory but Carles Cuadrat will be pondering about how to replace Nishu Kumar in the second leg. Antonio López Habas’ will be disappointed about ATK’s performance and will be eager to resolve their shyness in front of goal in the return leg.

The reigning champions will take a one goal advantage when they travel to Kolkata.