Ferran Torres' equaliser clinched Barcelona a 1-1 draw with 10-man Eintracht Frankfurt in the first leg of Europa League's quarterfinal. The visitors from Spain started powerfully into the encounter as Frankfurt goalkeeper Kevin Trapp had to tip Torres' hammer over the crossbar in the third minute on Thursday night. 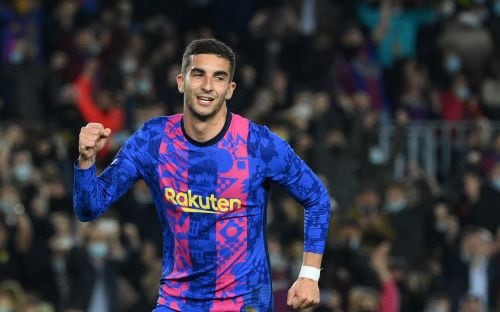 Berlin: Ferran Torres' equaliser clinched Barcelona a 1-1 draw with 10-man Eintracht Frankfurt in the first leg of Europa League's quarterfinal. The visitors from Spain started powerfully into the encounter as Frankfurt goalkeeper Kevin Trapp had to tip Torres' hammer over the crossbar in the third minute on Thursday night.

The "Eagles" responded in style and missed the golden chance to break the deadlock three minutes later as Djibril Sow had the entire goal to aim for but pulled wide from inside the box.

Barcelona remained dangerous and came to a promising chance in the 17th minute when Pierre-Emerick Aubameyang fired the ball from a tight angle into the side netting, Xinhua reports. The hosts got a penalty awarded at the other end of the pitch but Sergio Busquet's challenge inside Barcelona's box was overruled after a review in the 38th minute.

Frankfurt caught a fairy-tale start into the second half and opened the scoring through Dortmund loanee Ansgar Knauff, who controlled a Filip Kostic corner at the edge of the box before drilling the ball past Marc Andre ter Stegen into the top right corner.

Barcelona remained unfazed and answered in the 66th minute when substitute Frenkie de Jong traded passes with Torres, who found the bottom corner from a central position. The hosts had to swallow another setback in the 78th minute as Tuta received his marching orders after booking his second yellow card for a foul on Pedri.

Barcelona pressed forward but Frankfurt's defence stood firm to take a 1-1 draw into the second leg at Camp Nou.

"We played out a 1-1 draw against Barcelona, but we are a bit disappointed as we played very well and worked out many clear-cut chances. We must build on this result in the second leg next week. Today we showed that we can hold the pace with one of the best teams," said Frankfurt goalkeeper Kevin Trapp.

"We knew that Frankfurt is a strong team, especially with their fans on home soil. We needed some time to gain a foothold into the game, but I think 1-1 is a decent result," said Barcelona goalkeeper Ter Stegen.

Davide Zappacosta's own goal helped Leipzig to take a 1-1 draw into next week's second leg with Atalanta following Europa League's quarterfinals. Leipzig started brightly on the road as Christopher Nkunku tested Atalanta goalkeeper with a long-range attempt in the opening stages.

The opener was scored at the other end of the pitch though as Atalanta broke the deadlock with their first chance after Luis Muriel unleashed a hammer from inside the box into the top corner.

Leipzig responded with furious attacks and rattled the woodwork in the 24th minute when Andre Silva hit the foot of the post from inside the area.

Atalanta remained dangerous in front of the target as Mario Pasalic left a promising chance unused after only hitting the near post from a tight angle just before the halftime whistle.

The visitors from Germany caught a fairy tale start into the second half as Merih Demiral brought down Nkunku inside the box to concede a foul play penalty.

Atalanta should have restored their lead moments later but for all that substitute Giorgio Scalvini pulled wide from eight meters while Teun Koopmeiners hit the woodwork with a fierce strike.

The visitors increased the pressure in the closing stages but were unlucky.

"There were lots of chances at either end. I thought we came into the game well and did well to cope with going behind. We still managed to show our quality and it was important that we showed we can come from behind. Now we have 90 minutes to make it count next week," said Leipzig captain Peter Gulacsi. IANS