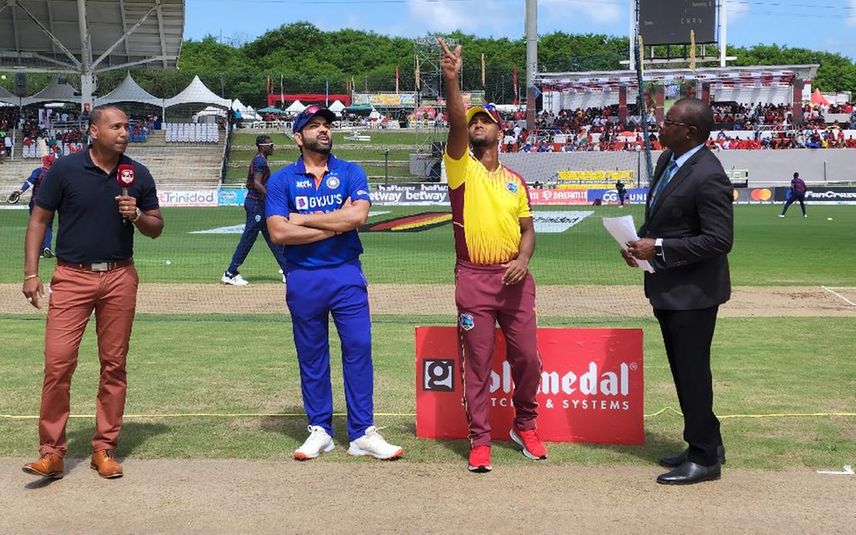 Tarouba [Trinidad and Tobago]: West Indies skipper Nicholas Pooran won the toss and opted to bowl first against India in the first T20I of the five-match series at the Brian Lara Stadium on Friday.

Earlier in the day, wicket-keeper batter Sanju Samson was announced as a replacement for KL Rahul in India's squad for the five-match T20I series against West Indies.

In an official statement released by the Board of Control for Cricket in India, it was confirmed that KL Rahul tested positive for Covid-19 last week and had been advised to rest by the BCCI medical team.

In the three-match ODI series, India completed a clean sweep of 3-0 over the hosts.

West Indies captain Nicholas Pooran said at the toss, "Going to bowl first. Maybe there's something on the pitch. Nice to know what you're chasing. Looking forward to this series. We enjoy the format. We like to entertain. One spinner. Alzarri Joseph making his debut. Shimron Hetmyer back into the team."

Indian captain Rohit Sharma said at the toss, "Ready to go. Good to have some time off. Pretty excited to get back and get things underway. First international game being played here, good to see the fans coming in large numbers. Facility looks good. Will have to look at how the wicket plays. Few guys have left, few have come back. Quite excited to get underway."

KL Rahul to miss out T20I series against West Indies

Thalassery native to captain UAE team fighting for a place in Asia Cup ...