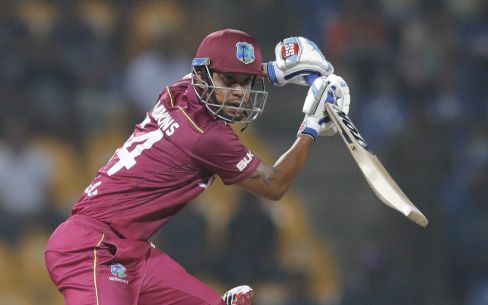 Taking to Twitter, the Windies cricketer, who last played an international game in October 2021 against South Africa, issued a statement announcing his retirement.

"When I wore the Maroon Colours of the West Indies Cricket for the first time on debut in ODIs on December 7th, 2006, little did I know that my international career would have lasted 16 years but my passion and love for the sport fuelled me every day. I am closing this chapter of International Cricket having played 144 matches and scoring 3,763 runs from all formats. I want to thank the West Indies Cricket Team for the opportunities, and I wish the new crop of WI players all the best and to keep on believing in yourselves and your abilities," said Simmons in his statement.

"My family and friends are my true motivators as they kept me inspired for so long. Now, I have the time to be one cheering them on the sidelines. I really hope that I represented them well because I did it for them. There were times when the odds were against me, but you stood tall alongside me. Of course, the FANS, whenever we meet in person, cheering on in the stands or messages on social media...Despite the ups and downs, you all gave me the energy that was needed to bat on for so long," he added.

Simmons advised the youngsters not to be ashamed of dreaming big, saying that it takes a lot of determination, focus and a strong mind to get over the numerous hurdles, but it is all worth it in the end.

"Cricket allowed me to travel the world, meet great people and experience different cultures leaving uncountable and meaningful memories. I never cheated the game; I gave it 100 per cent of hard work and that is why I was able to play Internationally for almost 16 years," he continued.

"I still do extensive training and keep myself relatively fit, so my focus is to continue playing franchise cricket for as long as my body permits. Hopefully, I can continue to entertain the people of my region and all over the world for a few more years as I am still timing the ball beautifully and beating bowling," he concluded.

He leaves this sport as a player as a part of the West Indies team that won the ICC World T20 title in 2012 and 2016. His knock of 82* against India in the semi-finals of the 2016 edition of the event is one of the major highlights of his career.

In eight Tests for West Indies, he scored 278 runs at an average of 17.37. He has the individual best score of 49 in the format.