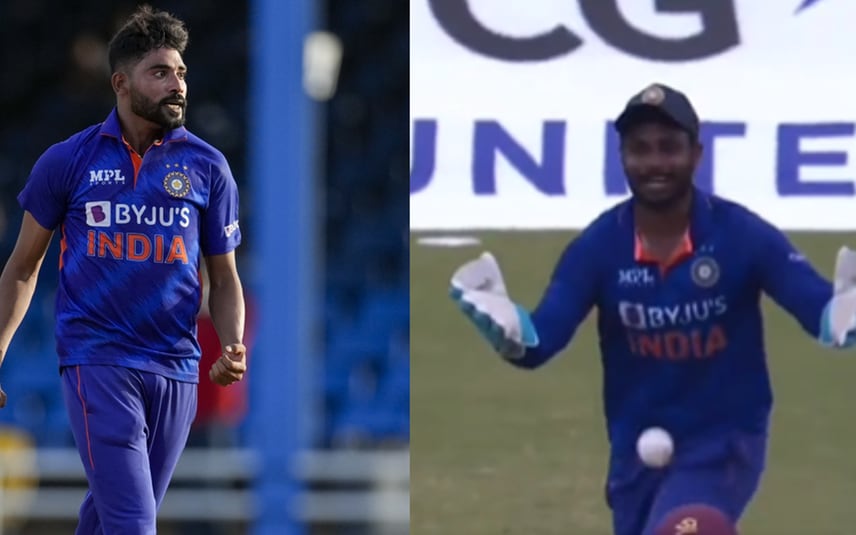 Sanju V Samson had a fantastic outing against West Indies in the second ODI on Sunday. Despite knocking a half-century, the Rajasthan Royal skipper also showcased a brilliant performance as a wicketkeeper.

At one moment during the game, Sanju Samsons' funny gesture at Mohammed Siraj went viral on social media. In the 49th last, Sanju caught the ball comfortably in his gloves after Akeal Hosein missed delivery from Siraj on the off-side. Sanju immediately returned the ball straight to Siraj, who fumbled and failed to catch the ball, leaving WI players to take a single.

In the same over, Sanju made sure the fast bowler did not make the same mistake again after a similar situation arose. Sanju is heard saying “Pakad le pakad le” after he returned the ball back to Siraj.

On the first ODI, Sanju's iconic save turned out to be the match decider. He was praised for his efforts despite performing underwhelmingly as a batter in the game.

Watch: Sanju's miraculous save against WI in first ODI

Virat Kohli equals record of most fifty plus scores in T20Is

Asia Cup: After success against Pakistan, India should continue 'short ...

Live-in relationships increasing in Kerala; `Use and throw' culture affects ...