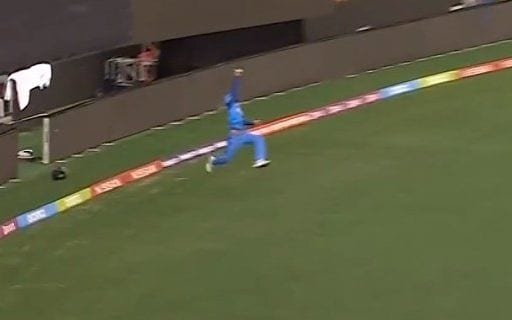 India had a fantastic start in Australia ahead of the opener against Pakistan next week in the ICC T20 World Cup 2022. In the warm-up match on Monday, the Rohit Sharma-led team managed to beat defending champions Australia by six runs, with Mohammed Shami surprisingly bagging three wickets in the final over.

However, Virat Kohli surprised everyone with a stunning catch in the final over, leading to the dismissal of Pat Cummins. Though Kohli had a disappointing day with the bats, he did not disappoint coming to the fielding. Kohli, fielding in the long on, acrobatically jumped, caught the ball one-handed and kept his balance steady, ensuring that the Australian Test Skipper is gone for good. Earlier, his excellent fielding led to the run-out of Tim David in the final over.

Shami was a surprise pick to bowl the final over. He then nailed his last two yorkers right and knocked over Josh Inglis and Kane Richardson to seal a narrow win for India in a final over where four wickets fell, including that of Ashton Agar.