On Tuesday, Ben Stokes retired from ODI cricket after the first match against South Africa at his home ground in Durham. Stokes, who captains England in Test cricket, cited that playing three formats of the game was "unsustainable" in a hectic cricketing schedule. 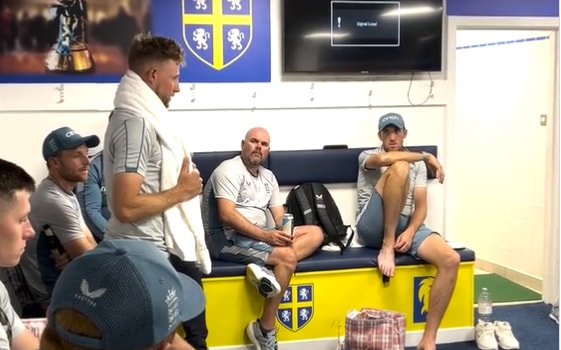 Manchester: On Tuesday, Ben Stokes retired from ODI cricket after the first match against South Africa at his home ground in Durham. Stokes, who captains England in Test cricket, cited that playing three formats of the game was "unsustainable" in a hectic cricketing schedule.

After the match ended in a 62-run defeat, England batter Joe Root gave a heart-warming speech in the dressing room, paying rich tributes to Stokes and his impact on ODI cricket. "You might have to bear with me a bit here lads because I don't think anything I say will be able to sum up what I think of Ben. Obviously, a lot of emotions will be running through you. There's a lot running through me as a friend."

"But just to some things I mean, your performances throughout your career. Some of the things you have achieved in the field have been extraordinary. Whether it be in the cup final, whether it be a number of other things that you've done."

'Fifers, hundreds, incredible pieces of fielding, But I think it's also important to remember some of the things you have done have captured a nation. They have brought people to the games that have never watched it before."

Stokes ended his ODI career at 105 matches, making 2924 runs with a batting average of 39 and a strike rate of 95, including three centuries and 21 half-centuries. He also picked 74 wickets at an average of 42.39 and an economy rate of 6.05. Root further heaped praise on how Stokes has inspired young kids to play cricket like him.

"(Stokes has) been a part of the team and been a big part and a leader of a team that's changed the way a lot of people around the world play white-ball cricket in its format. The same with kids now that want to bat, bowl and field because of the way you have gone about it and done it in an England shirt and they are incredible things to be able to look back and say 'Wow, I achieved it all'."

"From my personal point of view, from this whole group's point of view, it's been so much fun. It's been a hell of a journey. We are all so proud of everything you have achieved. You've been an incredible player, an incredible bloke and as a small token of appreciation, we've got you some, something in here to Congratulations mate," concluded Stokes.

After giving the speech, as a token of appreciation, Root gave Stokes a bottle of champagne and congratulated him for a wonderful career in ODI cricket. England will now face South Africa in the second match at Manchester on Friday.
IANS

Inaugural edition of Women's IPL to be held in March 2023