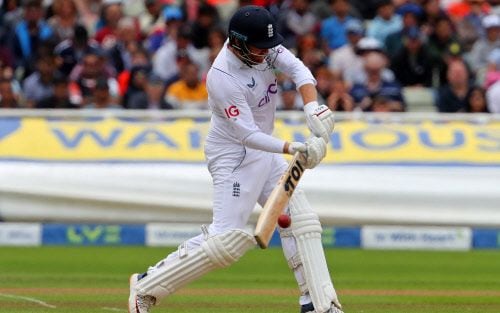 Birmingham: Jonny Bairstow completed his third hundred in successive Tests before falling for 106 at Edgbaston on Sunday to leave England's series-decider against India intriguingly poised.

Bairstow, 91 not out when rain forced an early lunch on the third day of the Covid-delayed fifth Test, went to three figures when a push off seamer Shardul Thakur was misfielded on the cover rope to give the Yorkshireman his 14th four in 119 balls. He also hit two sixes.

The 32-year-old Bairstow's latest century followed scores of 136 at Trent Bridge and 162 at his Headingley home ground, where he also made an unbeaten 71 in the second innings, in England's recent 3-0 whitewash of Test world champions New Zealand.

In England's first series under their new leadership duo of Stokes and red-ball coach Brendon McCullum, the team had several times hit its way out of trouble.

But for all the talk of the new 'Bazball' approach, a reference to former New Zealand captain McCullum's nickname, Bairstow did still play himself in against India's impressive pace attack in a match England have to win to square this five-match series at 2-2.

Bairstow was 16 not out off 65 balls before, playing orthodox but powerfully hit strokes, he accelerated in scoring his next 84 runs off just 54 balls as the 32-year-old went to his fifth Test century of 2022.

But he fell to the first ball of Mohammed Shami's new spell when an edged drive flew to Virat Kohli at first slip.

Former India captain Kohli, who earlier Sunday had been spoken to by the umpires following a verbal altercation with Bairstow, blew a kiss to the crowd and England, at 241-7, were still 175 behind.

All-rounder Stokes, nought not out overnight, batted in frantic fashion for 25.

Already dropped on 18, when Shardul Thakur floored a routine catch at cover, Stokes was missed again on 25 when India stand-in captain Jasprit Bumrah dropped a low chance at mid-off, with Thakur the unlucky bowler on this occasion.

But Thakur was not unlucky for long as Stokes, far from retreating into his shell, drove harder and higher next ball only for Bumrah, diving to his left, to hold a brilliant catch and one far harder than the chance he had missed.

That catch continued an excellent all-round match for Bumrah, leading India for the first time after regular captain Rohit Sharma was sidelined by Covid-19.

The tailender had smashed Stuart Broad for 29 in an over costing a total of 35 -- the most expensive in Test history -- in a flourish to an India total built on hundreds from Rishabh Pant (146) and Ravindra Jadeja (104).

Bumrah, in his more familiar role of new-ball spearhead, then removed all of England's top three for a superb haul of 3-35 in 11 overs. That gave him 21 wickets in the series, the most by an Indian bowler in a series in England.

This decider should have been played in Manchester last September only to be postponed just hours before the start at Old Trafford because of coronavirus concerns within the India camp. AFP

Ravi Shastri calls for reduction in number of T20Is played to counter scheduling ...