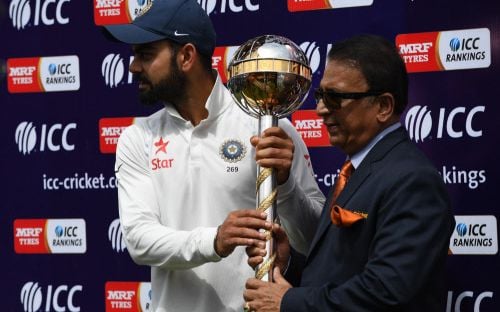 Mumbai: Former India captain Sunil Gavaskar has said that Virat Kohli is not playing well currently and there is a big technical glitch that has come into his game at the moment.

Kohli disappointed with the bat in the second innings of the ongoing Lord's Test after being dismissed for 20. Kohli chased a wide delivery bowled outside off and he also his wicket to Sam Curran.

"That method has been successful for him. He has got 8000 Test runs with that back and across movement. But he is playing at deliveries way outside off stump and a little too early in the innings. This time around, the foot is somewhere else, the bat is somewhere else, which means that he hasn't really played well," Gavaskar said on the Sony Sports network.

"It could be about this much-talked-about word intent but in a five-day game, every batsman goes in to score runs. It's the method that differs," he added.

Further talking about Kohli, Gavaskar said: "When you talk about this trying to take this attack to the opposition approach, and if that is what intent is, it can get you into trouble as we saw. I think every batsman should be left alone to find his own method. This is a Test match."

"In ODI and T20I, it's a completely different situation, but over here, what they need to look into is get themselves in and try to play in the old-fashioned V. Play only when you have fought through," he added.

Ajinkya Rahane and Cheteshwar Pujara scored 61 and 45 respectively as India ended Day 4 at 181/6 and the visitors have extended their lead to 154.