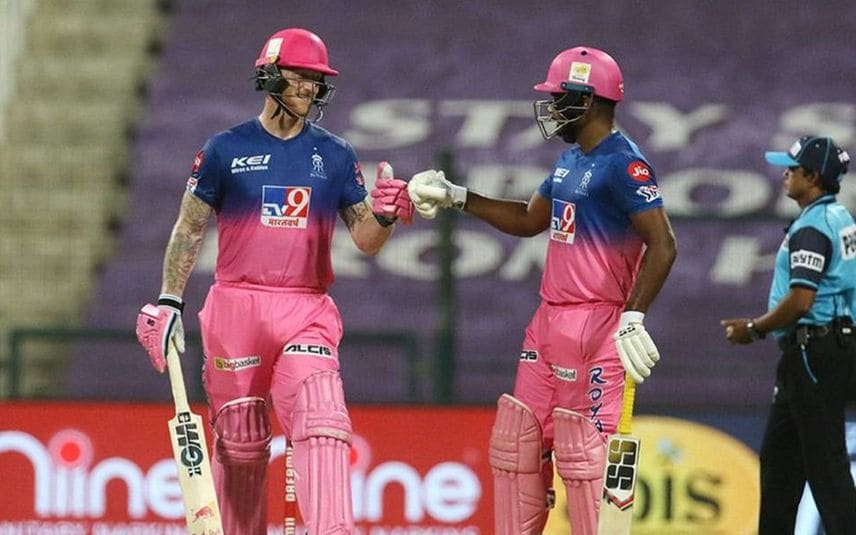 Abu Dhabi: Ben Stokes (107 not out) and Sanju Samson (54 not out) made a mockery of a target of 196 Mumbai Indians (MI) had set for Rajasthan Royals (RR) as they helped overhaul it with eight wickets and nearly two overs to spare in an Indian Premier League (IPL) match here on Sunday.

It was Stokes's second IPL century and his highest score in T20s. RR ended their innings on 196 for two wickets in 18.2 overs in reply to table toppers MI's 195/5 wickets in 20 overs.

Despite the defeat, MI remain perched at the top position with 14 points from 11 matches while RR moved to the sixth place with 10 points from 12 games. The competition for the fourth is heating up.

Each team plays 14 league matches, at the end of which the top four teams qualify for the final, to be played on November 10.

Stokes's century not only garnered a much-needed win for the Royals -- who are still afloat in the league -- but also outshone Hardik Pandya's blitzkrieg (60 not out, off 21 balls) which had earlier propelled MI to a competitive looking total.

Chasing the challenging target, RR lost opener Robin Uthappa (13) and Steve Smith (11) early with their scorecard reading 44/2 in 4.4 overs. Both the RR players were picked by James Pattinson (2/40).

However, both Stokes and Samson dusted off their rustiness in style as their sensible batting left the MI bowlers struggling.

Hardik and Tiwary accumulated 79 runs of the last five overs as MI recovered from a mini collapse.

The defending champions then went on to lose Suryakumar and Keiron Pollard (6) in quick succession that left MI at 101/4 in 13 overs. Pollard's fall brought in Pandya, who started slowly before swiftly shifting gears.

Archer got rid of Tiwary off the first delivery of the 19th over and conceded merely three runs in the next five balls.

However, Hardik was in no mood to spare RR bowlers as he smashed Kartik Tyagi for 27 runs off the final over, and in the process also notched up his half-century.

Hardik remained unbeaten on 61 as MI comfortably posted a challenging total. His carnage was laced with two fours and seven massive hits into the stands.