According to the rules of the tournament, if the final match is heading towards the draw, then whoever manages to take the first-innings lead is declared as the winner. 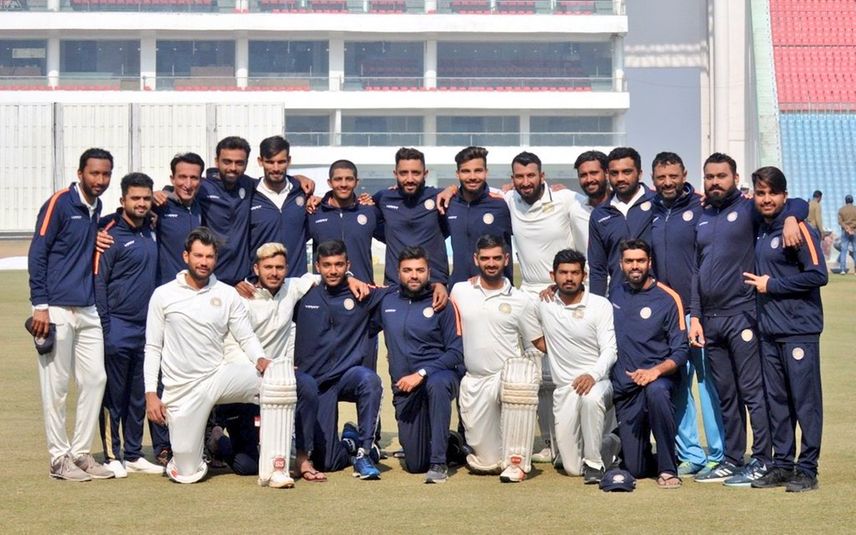 Rajkot: Saurashtra won their maiden Ranji Trophy title on Friday on the back of their first innings lead against Bengal in the final played at the Saurashtra Cricket Association Stadium. It is their first-ever win in the history of India's premier domestic competition.

Saurashtra had posted 425 in their first innings riding on a brilliant century from Arpit Vasavada and gritty half-centuries from Avi Barot, Vishvaraj Jadeja and Cheteshwar Pujara. They then restricted Bengal on 381, thus taking a crucial lead of 44 runs on the final day of the match. Dharmendrasinh Jadeja was the pick of the bowlers as he scalped three wickets, while skipper Jaydev Unadkat and Prerak Mankad picked two wickets each.

In their second innings, Saurashtra put up 105 runs for the loss of four wickets in the 34 overs they batted on the final day before the players shook hands and agreed on a mutual draw.

According to the rules of the tournament, if the final match is heading towards the draw, then whoever manages to take the first-innings lead is declared as the winner.

During the course of the game, Unadkat also broke a 21-year-old record as he became the fast bowler with most wickets in a single Ranji season. He picked up 65 wickets in the season and snapped the record which was previously held by Karnataka's Dodda Ganesh. The Karnataka pacer had bagged 62 wickets in 1998-99 season.

After the match, Pujara -- who is India's batting mainstay when it comes to Test cricket -- said: "It's a great feeling and we are in a different world altogether. At the start of the season, we believed that we could win. Last season, we lost in the final, we had a chat after that and credit goes to the boys.

"The best thing about this team is most of them have played cricket together for a long time. Everyone contributes at sometime or the other. Not many state teams play as a team. It's a nice unit and whenever I am here, I always feel comfortable. We are working towards one process and we got the title today."

COVID-19: Ranji Trophy to proceed as per schedule, confirms Ganguly