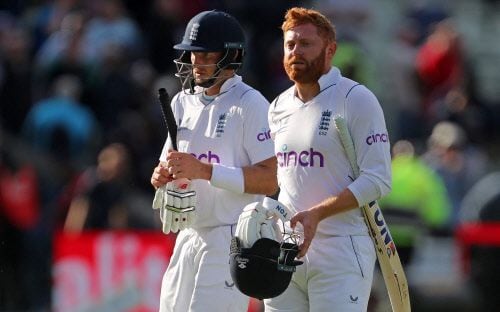 Birmingham, England: A confident and positive England motored to 259-3 in its chase of a record 378 against India on day four of the fifth test at Edgbaston on Monday.

England needs 119 more runs with seven wickets in hand to win the test and square the series 2-2.

Former captain Joe Root was 76 not out and run machine Jonny Bairstow 72 not out. Their unbeaten stand of 150 at more than 4.5 runs per over reflects the new go-for-it approach by England in the past month under new coach Brendon McCullum and new captain Ben Stokes.

The hosts threaten to eclipse their record run chase of 362-9 in the 2019 Ashes at Leeds. The fans believe. The allocation of free tickets for the fifth and final day were entirely snapped up quickly on Monday.

Opener Alex Lees said the team has "ultimate belief in one another, from one to 11, that we could do this. We're just very optimistic about it. You know the target is there but you just try and put it into the background. It's not something we necessarily spoke about.

"As a unit our batters are getting runs, they're confident, it's a pretty good wicket and a good outfield. So, obviously, we just want to take the game to the opposition.”

The target was set after India was bowled out for 245 for an overall lead of 377. India's last seven wickets were taken for 170 runs.

A rollicking start to England's chase was given by opening batters Lees and Zak Crawley in a combined stand of 107 within 23 overs before tea.

“Brendon McCullum pretty much just said, ‘Go and do your thing,’” Lees said. "We all know the brand this team wants to play. I just want to express myself.”

Lees and Crawley decimated the India fast bowlers with their punchy drives on both sides of the pitch. Lees took early charge then Crawley settled in and played some exquisite drives much to the frustration of the visitors.

Crawley made 46 before being bowled by Jasprit Bumrah right on tea; Ollie Pope went for a duck to Bumrah off the first ball after tea; and Lees was run out in a mix-up with Root on 56 — all three wickets going in the space of two runs.

But Root and Bairstow quickly snuffed out India hopes and blunted their attack. Root survived a couple of lbw video referrals in successive overs and Bairstow was dropped twice.

Earlier, India's second innings ended half an hour after lunch when Stokes folded up the tail and finished with 4-33.

Cheteshwar Pujara started off well by hitting James Anderson for two boundaries in one over, but fell on 66 to Broad’s third ball. Pujara had been patient throughout his 3 1/2-hour knock, leaving dozens of balls outside the off stump before he cut hard at Broad and was caught at backward point.

Shreyas Iyer’s inability to cope against short deliveries was exposed again when he played a tame pull shot against Potts and was caught at mid-wicket on 19.

First-innings century-maker Rishabh Pant completed his half-century with a boundary off his pads to fine leg against Broad but he was out for 56 when he tried to reverse sweep spinner Jack Leach and Root plucked a fine catch.

Potts launched short ball at India’s tailenders and Shardul Thakur was struck on the helmet twice before he was out attempting a hook.

Stokes wrapped up the tail which put up a staunch resistance in the first innings, and watched his aggressive batters set up a winnable chase on the last day. AP