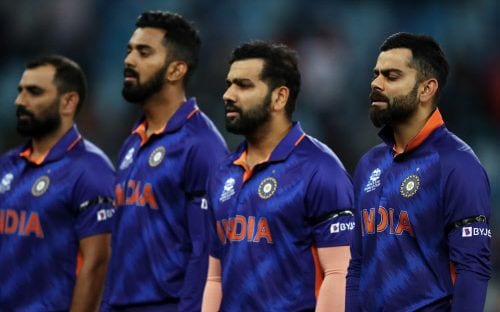 Nottingham: India skipper Rohit Sharma has hit back at "experts" who are questioning Virat Kohli's place in the T20 side, saying the star batter's "quality" is beyond doubt and the team management will continue to back him.

Kohli, who has not scored a hundred across formats since November 2019, failed to make an impact in the couple of T20s against England.

While his form is being questioned in all formats of the games, Kohli was making a return to T20 Internationals after five months.

The likes of Deepak Hooda got opportunities in Kohli's absence and he made the most of it. However, Hooda did not find a spot in the playing eleven after showing sublime form against Ireland and the series opener against England.

Speaking to reporters after the third T20I on Sunday, Rohit said the experts don't know what is happening inside the team.

"It's not difficult at all for us because we don't listen to outside noise. Also, I don't know who these experts are and why they're called experts. I don't get that," Rohit said when asked about his thoughts on how the team is looking at Kohli's form.

While Kapil said players can't be picked on reputation and one has to go by current form, Vaughan feels Kohli needs a three-month sabbatical from the game.

"They are seeing from outside, they don't know what's happening inside the team. We have a thought process, we make the team, we debate and discuss it and think a lot about it.

"The players we pick are backed, they are given opportunities. People on the outside don't know about it. So it's more important about what's happening within our team, that's important for me," said Rohit in response to the growing criticism over Kohli's wretched run.

Kohli has 70 international hundreds to his name, only behind Ricky Ponting (71) and Sachin Tendulkar (100) in the game and Rohit feels the star batter's quality can't be questioned.

"Also, if you are talking about form, it goes up and down for everyone. The quality of the player doesn't go bad. We should always keep in mind when such comments are passed around. We're backing that quality.

"It might take time for some to understand. But for us, inside and running the team, we know the importance. I'll request those on the outside, yes you have all the right to talk about it, but for us, it doesn't matter a lot," added Rohit. PTI

Talks that ODI cricket is losing its appeal are nonsense: Rohit Sharma

It is still too early to compare Babar with one of all time greats Virat: ...

Rahul Dravid tested positive for Covid ahead of Asia Cup

Massive fire at godown of paint chemicals in Kozhikode

Smiling snap of relatives at funeral goes viral: Here is what the family ...