Rajasthan Royals on hat-trick of wins, Kolkata Knight Riders out to stop their run

As Dubai has been host to both the Super Over matches so far in the tournament, another juicy contest is on the cards. 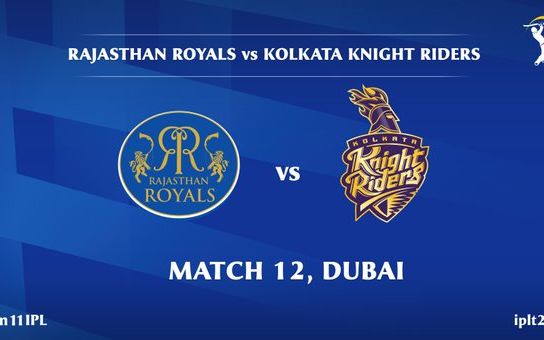 Dubai: In-form Rajasthan Royals (RR) will aim for a hat-trick of wins when they square-off against two-time IPL winners Kolkata Knight Riders (KKR) at the Dubai International Cricket stadium here on Wednesday evening.

After defeating Chennai Super Kings (CSK) in their campaign opener, the Steve Smith-led RR overhauled the highest tournament total of 224 against Kings XI Punjab (KXIP) in their previous match. They are high on confidence as they take another step towards qualifying for the playoffs, though that is a bit far at the moment.

RR opener Sanju Samson and skipper Smith smashed half-centuries in the game against KXIP. However, with the match slipping away from their hands, Haryana all-rounder Rahul Tewatia's blitzkrieg bought them back in the contest. Once again, all eyes will be on Samson, who has two half-centuries from as many games, and Tewatia, who smashed 53 off 31 balls against Kings XI Punjab.

Jos Buttler, who joined the team just before the previous game, managed only four runs against KXIP while Robin Uthappa departed after contributing just nine runs. The RR team management would not tinker much with the winning combination. However, a slight change in the batting-order might be possible.

In the bowling department, Ankit Rajpoot, who was expensive against KXIP, might be replaced while Jofra Archer will once again lead the pace attack along with Tom Curran and Jaydev Unadkat. Leg-spinner Shreyas Gopal, who has been amongst the runs so far, will look to overcome as the spin department will heavily rely on his shoulders.

On the other hand, KKR have a win and a loss so far. After going down to the Mumbai Indians in their first game, the Dinesh Karthik-led KKR made a fine comeback as they ticked all the boxes against SunRisers Hyderabad (SRH) and came out victorious.

Pat Cummins, who had a disastrous outing against Mumbai, roared back against SRH as the pacer conceded just 19 runs from his quota of four overs besides bagging a wicket. The Aussie quick will look to continue from where he left and will seek support from Shivam Mavi and Kamlesh Nagarkoti.

In their last game, KKR hit the ground with an extra bowler in Varun Chakravarthy and it remains to be seen whether they opt to continue with the strategy or make any changes.

Looking at the spin favourable track in Dubai, Sunil Narine and Kuldeep Yadav would definitely be a part of the KKR playing XI on Wednesday.

Narine will also have an added responsibility of handing flying start to KKR while opening as the Caribbean's willow has remained silent so far. He will once again open with Shubhman Gill, who looks in fine touch with the bat after 62-ball 70 against SRH.

Meanwhile, skipper Dinesh Karthik and Eoin Morgan will have to handle the batting in the middle-order before Andre Russell, from whom fireworks are expected down the order.

As Dubai has been host to both the Super Over matches so far in the tournament, another juicy contest is on the cards.