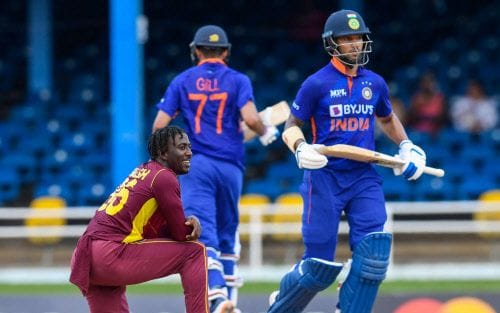 Shikhar Dhawan(R) and Shubman Gill running between the wicket | ANI

Port of Spain: Skipper Shikhar Dhawan and his opening partner Shubman Gill hit fine half-centuries as India reached 115 for 1 against West Indies in 24 overs before rain stopped play in the third ODI here on Wednesday.

The duo added 113 for the opening stand, their second hundred plus partnership in the series, with Dhawan notching up his second half-century (58 off 74 balls) following his 97 in the opening game.

Dhawan's innings had seven fours, while Gill was batting on 51 off 65 balls with three fours and a six to his credit. He had Shreyas Iyer for company on two.

Dhawan was out when he played against the turn to a googly from Hayden Walsh and Nicholas Pooran held on to a simple catch at mid-wicket.