Speedster Mohammed Siraj, who bagged a five-wicket haul in the second innings of the fourth Test that India won by three wickets, reached his home town Hyderabad, and visited the graveyard where his father is buried. 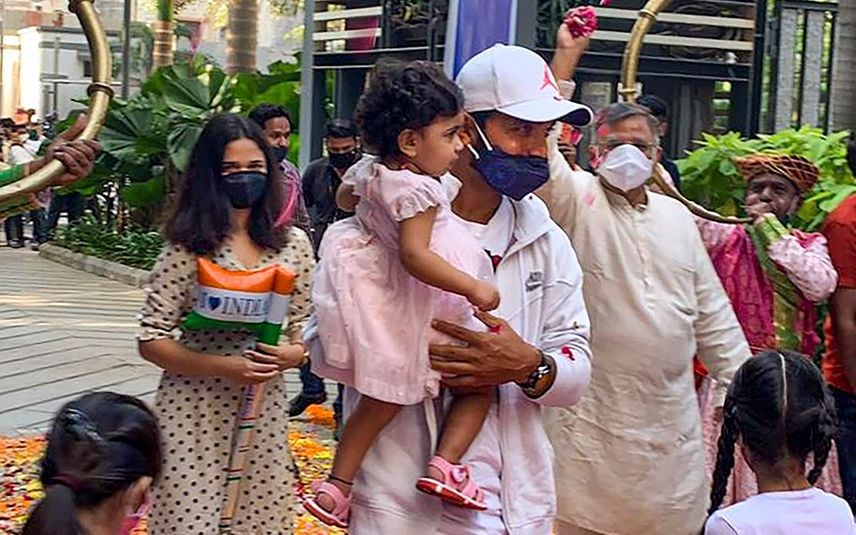 Cricketer Ajinkya Rahane, who led India to a 2-1 win in the recent test series against Australia, being welcomed by his family and supporters on his arrival at his residence in Mumbai on Thursday | Photo: PTI

Mumbai: Ajinkya Rahane, who captained India to a memorable Test series win in Australia, received a red carpet welcome when he arrived at his Matunga residence here on Thursday while pace bowler T Natarajan was taken on a chariot on arrival in his village in Salem district of Tamil Nadu.

Rahane held his little daughter Aarya and walked slowly on the long carpet laid out by the members of the society where he lives while a life-size poster of the batsman was pasted on one of the pillars, along with words "Congrats to Our Persistent Pillar" written on top of it.

A large number of his society members gathered near Rahane's home as people showered rose petals on him while dhol and trumpets played constantly. Chants of 'aala re aala Ajinkya aala' (here comes our Ajinkya) could be heard.

Meanwhile, speedster Mohammed Siraj, who bagged a five-wicket haul in the second innings of the fourth Test that India won by three wickets, reached his home town Hyderabad, and visited the graveyard where his father is buried. His father passed away while Siraj was in Australia, and declined the team offer to visit Hyderabad to be with his family after his father's death.

Pace bowler T Natarajan who made his India debut in all three formats during the Australia tour and played the Gabba Test which India won, arrived in Chinnappampatti village in Salem district to a rousing reception. He was taken on a chariot to his home in the village with people playing percussion instrument chenda.

Rahane had taken over the captaincy from Virat Kohli after the first Test of the Border-Gavaskar Trophy when he latter returned home to be with his wife who was expecting their first child. The baby was born last week.

India won the four-Test series 2-1. Their next assignment is a full fledged home series against England.